I had been doing nst&#39;s twice weekly since I was 35 weeks, it began like this

I had been doing nst's twice weekly since I was 35 weeks, it began like this. At my 32 week scan my Dr had an emergency and I had to see a midwife instead, the midwife said our baby was measuring a week ahead and seemed to be heads down, I was then sent for an ultrasound at 34 weeks. The ultrasound revealed our baby was underweight, very long, and breech. My Dr requested nsts twice a week. So at 38 weeks to the day I was at my nst when our little guys heart rate jumped to 189 and stayed there for over an hour, my Dr came in and requested I go to labor and delivery to be monitored. Once we got to the hospital and hooked to his heart rate dropped to 130, and my Dr requested that we be induced, but he wanted to do it gently to protect our little guys heart (arrhythmia of some sort) at 9pm Friday the 3rd I had cirvodil placed. Soon after I began to contract. By 1am I was uncomfortable enough to ask for pain meds, however I wasn't able to get any at the time because I am severely allergic to deladid, and the pain meds were an off shoot of them.

By 4am I was so uncomfortable I asked for pain meds again and was given morphine to take every four hours.

At 8 am Saturday morning my Dr came to check my cervix only to realize there was no change. I was then hooked to patosin six hrs later I had dilated to one and was aloud to have an epidural. They also burst my bag and inserted internal monitors. The anesthesiologists first attempt at an epidural failed and painfully so. The second attempt worked better but ended up causing spinal migraine, and intense nausea during labor and days afterwards. Four hours after the epidural at around 5pm on Saturday my cervix was checked again and I had only dilated to 2cm, however the baby looked fine, the option of a C-section was brought up which I adimitly refused. I decide to up the patosin. Two hours later my epidural was increased and still no change. Two hours later still and was suddenly in horrible intense pain in one spot off to my side, the nurse turned me as my lower half was numb, and the internal monitor became dislodged. The pain was at my pelvic line but off center to the left, I suddenly knew in my heart something was wrong. I asked the nurse to contact my Dr and ask what he thought we should do. He recommended an emergency C-section said he'd be there in 20, he was there in 10. They jumped up my epidural to the point of knocking me unconscious our son was born Saturday the 5th at 12:44 pm. 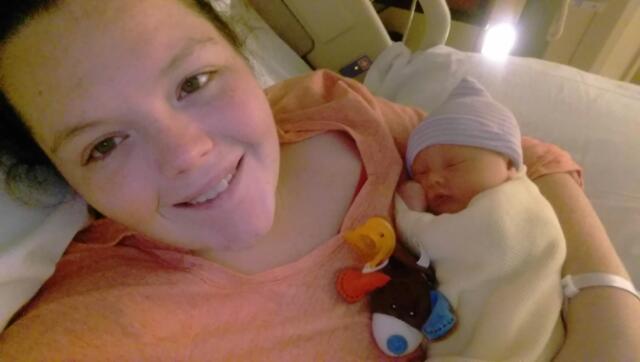