I was only 26.4 weeks in Saturday June 24. It was 10:30 at night and I was sitting in bed with my fiancé playing a board game when I felt a rush of liquid. We both laughed as I changed thinking I had just peed myself from sitting in an odd position with pressure on my bladder. We didn't laugh the second time I soaked my pants just minutes later. We both knew something wasn't right. I changed again and off to the hospital we went. My OBGYN was called into the hospital to tell us what we already knew... my water had broke 14 weeks early. I wasn't due until September 26th. My doctor told me I was going to have to be transferred to a hospital that had a unit meant for premature babies, our hospital just isn't equipped. He gave us our choice of 3 hospitals and we picked. I'm put into an ambulance and begin the long ride to the nearest hospital with a NICU unit. It's still over an hour and a half away. We arrive at the new hospital. Unprepared. No nurses we know, no doctor we know. We had met even made our birth plan yet. They ask us a thousand questions, stuff we hadn't even asked ourselves yet. Pain management, circumcision, pediatricians, etc. They run tests, bring in the High Risk OBs, start me on antibiotics on the off chance I develop an infection, and get an ultrasound to see how little fluid our son had. They told me to prepare for a long stay. I can't go home until he is born. Which could be tonight or could be weeks from now. They told me they wouldn't allow me to carry past 34 weeks. But that was still 8 weeks away! The next day our son was in distress. There was talk of emergency c-sections. Finally he settled. I was moved to a room that felt like my own personal hell. Stuck in a bed with so much unknown. Getting woke up every 2 hours for new antibiotics and vitals. This went on for a week. Once I was finished with antibiotics I was only woke up every 4 hours for new vitals. There was NICU tours and social workers and specialists. A wide array of faces trying to help me prepare for what was to come. The evening of July 11th came, I was feeling some contractions regularly and was dilated to 2 centimeters. But I was only 29 weeks! I was moved to labor and delivery. At 4:30am on July 12th they determined that my signs of early labor had slowed and I would be able to return to my room. Once back in my bed the contractions returned with a vengeance. I was pacing the room, trying to breathe through them. The nurses thought I was over reacting since I had just returned from labor and delivery. Finally I got a nurse to believe me, she put me on the monitors and realized I was contracting as much and as hard as I said I was. It was 8:30am, just 4 hours later when I was taken back to labor and delivery. I had planned on not having an epidural but decided the pain was too much. Epidurals are my new best friend, let me tell you. I didn't deliver until the next morning. Would've been a very long day of labor without one. The day went by pretty uneventful. Trying to get some sleep before the delivery and mentally prepare for having a preemie. On July 13th around 2:30am I started feeling a lot of pressure. They checked and determined I was only 4 centimeters. I tried to sleep some more but the pressure was getting worse and worse. The urge to push with each wave of pressure getting more and more intense. The doctors kept putting off rechecking my cervix, scared of an infection. Finally I made it known that I couldn't hold back pushing for much longer. At 5:30am the doctor rechecked, I was 9 cm and she could see a full head of hair. I was wheeled into the delivery room just around the corner and in the short walk there I was 10 cm and ready to go. It took me 9 pushes and 11 minutes to bring my son into the world. At 6:03am on July 13th Axel James entered the world at only 29 weeks.The delivery room was dead silent, waiting to see if he would cry. And cry he did. My strong little man came out kicking and screaming. 2lbs 14oz and 14 1/2 long. Small but mighty. He was off Cpap that afternoon already, just on cannulas to supplement minimum oxygen. Now at almost 5 weeks or 34 weeks corrected age, he has been in the step-down unit for 2 weeks now. Weighing 4lbs 14oz and working on eating from bottles. It's been a very trying time but he is so very worth it. 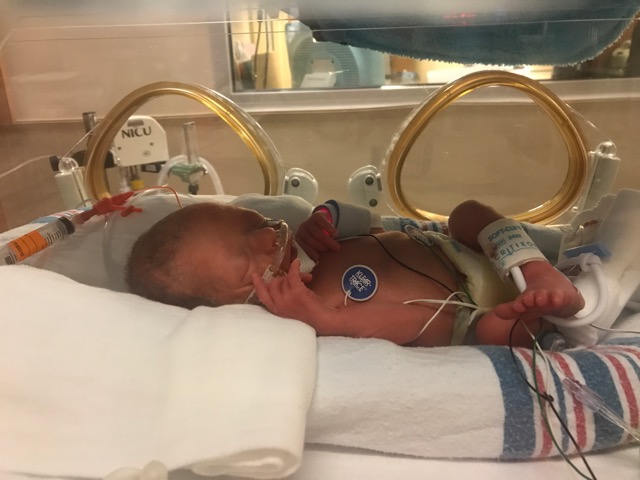 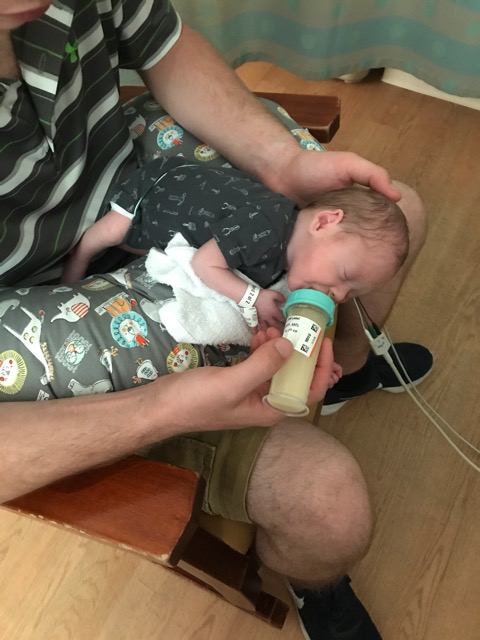 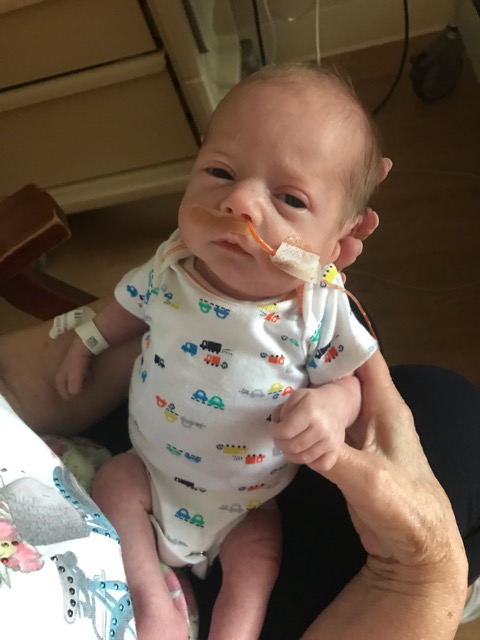