I don’t know how to cope other than not thinking about it, but I have to share... For me, I was so horrified of doctors and unnecessary medical intervention I didn’t do any prenatal care apart from one appointment at 12 weeks. I met several doctors and midwives (I think 10 total) before I just gave up and decided to go at it alone. I have always wanted to be a midwife and I have been reading birth material since I was 12 no joke. I was midwife to many many goats and I felt super confident that I could do it myself. I did have a woman who was going to assist the birth who had 5 unassisted home births. So at 40 weeks 3 days I started vomiting and shaking and I had to go in. They never did figure out what was he problem. It wasn’t preeclampsia or gestational diabetes. Every test came back totally normal and well within perimeters. So after about 8 hours in the labor room just shaking and nauseas we found out baby was frank breech and facing the right side. We tried to flip her (and I’d been doing exercises to get her in the right position since I was able to do them and having helped so many goats and my experience in feeling where legs were and where heads were I was certain my baby was in the right spot) and the flipping didn’t work. So I was stuck with a csection. It all happened so fast I didn’t tell anyone what was going on and my mom and my MIL just showed up on their own. We looked for a midwife or doctor who would let me attempt a vaginal birth but there wasn’t a single one in the tri-state area. We would have driven as far as we needed to for me to not have to have a csection. I want to have a very large family and I know csection complicates things a lot... at any rate I had a “gentle csection” and was allowed skin to skin right away, but I don’t remember hardly any of it. My mind is almost blank from my daughters birth and I think that’s what is making me most upset about it. I feel like I didn’t get a choice in how my baby would be born and I had such great plans for it. I had a horrible case of “baby shakes” immediately after they pulled her from me. It lasted for a few hours and I couldn’t hold her and I felt like I was going to pass it the whole time. Everyone just told me it was normal and I’m sure it is for something so traumatic. After we had a few minutes with her they checked her out and her respiration was just a little higher than they liked. They wanted to do an X-ray and we denied it. They came back three different times (not checking her respiration after the first time) and eventually they said “I wish you had a choice” and lied about her charts from the night before showing signs that something could be wrong. My mom argued with them and the original doctor that was trying to figure out what was wrong with me said her charts looked great that morning. So they took her and there was a small amount of fluid in her lungs. Immediately after the X-ray she coughed it up. All of it. But they still started her on a high dose of antibiotics and we fought them on that too. We just wanted to go home and be left alone. But the next X-ray was totally normal. And so was the next one!! They took 3 X-rays and they didn’t even ask us permission for the last one. They just took her and mentioned over their shoulder what they were doing and we couldn’t argue. They threatened to tell our insurance that we weren’t cooperating and saying the insurance wouldn’t pay for it if they did that. The hospital staff was rude and constantly fear mongering and horribly unhelpful the whole stay. (Weekend staff. Woohoo.) so in conclusion. None of the blood work, cultures, or anything they did to her showed a problem minus the first X-ray. They did so much to her that we didn’t want done and my worst fears were realized with this hospital experience. It was so horrifyingly unpleasant and a few of the staff felt so bad for us they gave us several extra large packs of diapers and toys for her and clothes and blankets... now we are on to my feelings. I feel like I cheated my way in to motherhood because I didn’t get to even start labor or feel contractions. Though I suppose the emotional pain and physical healing pain should be enough but it really isn’t the same. I’m traumatized and my baby developed thrush from all the antibiotics. My worst fears came true in every way they possibly could and I feel awful. 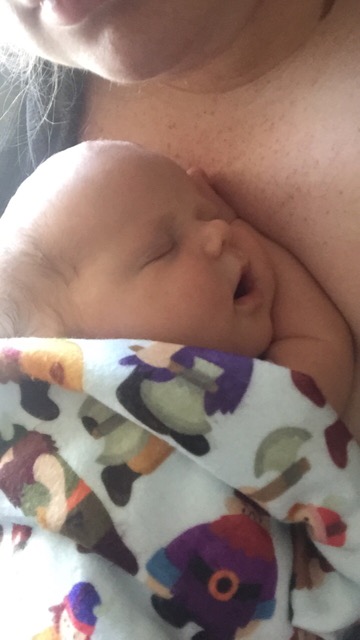 This is Thorrun Ellisif. She is perfect and I love her so much. I’m so incredibly hateful of doctors and hospitals and I deeply regret that I couldn’t find one in all of my searching that I liked. I hate that they tried (and admitted) to find something wrong with her. They made us stay in that god awful place for 4 days and I just feel terrible.

I can’t help but wonder how things could have been different but at the same time I don’t know how they could have been because the baby flipping only works 58% of the time and hardly ever so late in the pregnancy. I know I would have hated going to the hospital at all during my pregnancy and my blood pressure would skyrocket when I’d thing about going in and when I was there. I see doctors and intervention as a service that you pay for when you need it and not as a precaution. I still stand by that. But a birthing center opened just a few weeks ago two hours from where I live and I already talked to a few midwives and I met a few that I like. So next time I will be using their services for sure.