A STORY. Your opinions?

So this was the first cycle we really tried for baby #2.

We BD'd when I happened to be ovulating. I had a lot of EWCM, cramps, and a positive ovulation test the night before. The next day, the OPK was negative so I was like:

I took an OPK at 8dpo and that came back positive which was super weird, so I decided to take a test on a First Response because I thought I could see a faint line on the HPT's that came with my OPKS (Internet cheapies, Easy @ Home). I saw what I THOUGHT had been a faint line, and compared it to the FRER I took at 7dpo (cause I'm insane) and could see something for sure. So at this point I'm like

Then in the morning, I decided to test with a FRER and another internet cheapie. BFN on the FRER, and maybe a super faint line on the internet cheapie... But I was feeling pretty discouraged. I took another OPK and it was STILL positive, so at this point I'm like

I decided to take another FRER but digital, even though I was only 9dpo, at night with a 4-5 hour hold. Bfn on that, but I figured it was too only so then I tried with the IC - a very obvious but faint positive on an Internet cheapie! Another positive OPK...

At this point I'm going POAS crazy for the next few days, and got 4 more faint positives on my internet cheapies from 10-11dpo! And I was still getting dark positive OPKS, and the only thing I could come up with on Google for this was PCOS (which I'm pretty sure I don' have), or pregnancy. I googled and found that apparently my test strips were more sensitive than FRERs. So now I'm like..

So I bought 2 more FRER's off amazon, the mailman gets here and I'm basically like

Straight to the bathroom, no hold, drank tea, but I figured my urine was slightly dark enough to use aaaaaannnnd.... BFN. But now I'm trying to stay calm, thinking my urine is just diluted.... Telling myself I got a ton of positive internet cheapies, maybe a positive FRER, positive OPKS... I'm twisting the test thinking I can see SOMETHING, in the light, close up, like a psycho...

I take another FRER with a 4 hour hold and it comes back a solid BFN. I wait another 4 hours and finally take a clearblue digital. Not pregnant comes back up. I took another OPK and blaringly positive again.

My period was due at either 13dpo or 14dpo. So I figured at this point, I'd just wait it out seeing how I was now at 11dpo. But at 4:30 AM, I woke up to cramps and some blood. AF was here.. A full day or two early! And 13dpo would've already been early as it was because usually my cycles are pretty regular, 28 day cycle, 14dpo it's there. But last cycle it came at 13dpo so I was like...

Today I'm now 12dpo. I haven't been bleeding as heavily as I usually do and it's not brown like usual. My cramps went away after last night. I thought it was sort of weird, so I decided to take an OPK just for the hell of it, thinking it would surely be negative now. Nope, dark positive.

I know the OPKS aren't defective because before I ovulated, I was getting negatives and I got one after I ovulated too. So after doing some research, I'm wondering if it's possible that I'm experiencing breakthrough bleeding, and 11dpo was too early and should test again in a week? 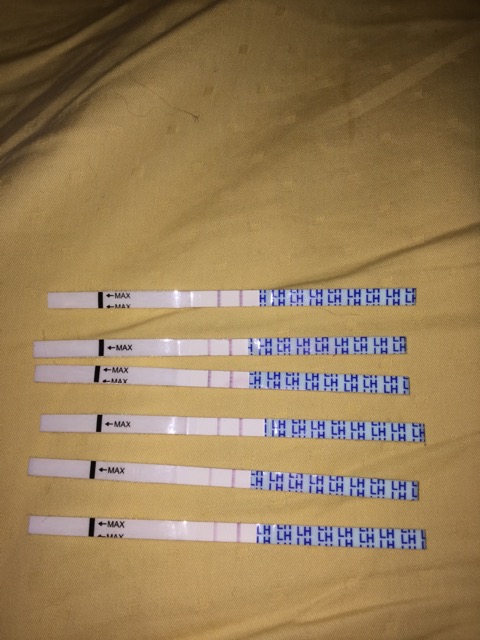 Now I know these are like ridiculously hard to see, so I promise I'm not a crazy person and I can see them in person and so can my S/O. But.. 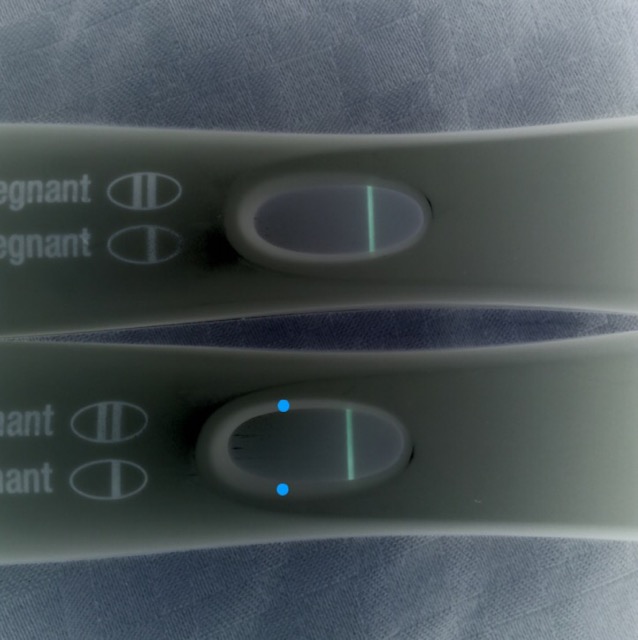 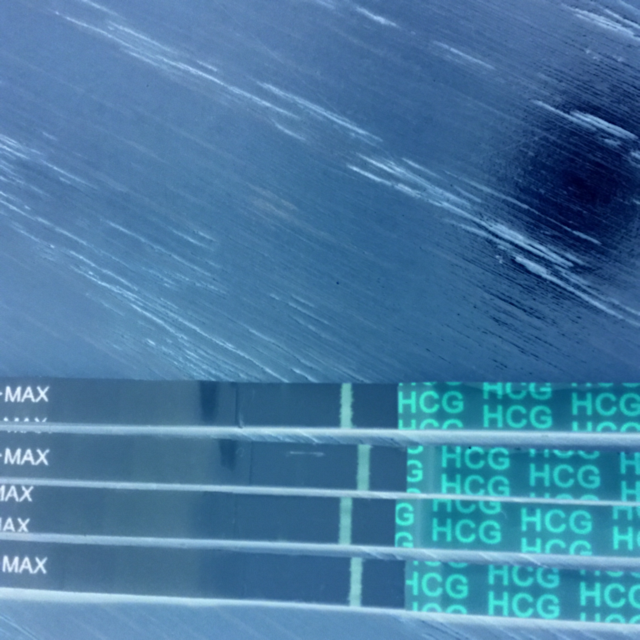 The top test is the last IC I took.

So, what are your thoughts?