I guess this is a relationship...

Okay, so first off let me tell you a little background story.

We started dating back in march, I found out I was pregnant in may. We stayed together until mid-august until he decided he wanted to be with this girl. He made up a whole lie, that the girl was backing up, that they were together the whole time and he would make me go through her to talk about my baby to him. He was telling me about how he was going to move hours away to start his life with his new girlfriend.

When they broke up, which was approximately 3.5 seconds later, 😅

He told me that they were lying to make me stay away and move on. (did i mention i went through a mental breakdown and was kept in psych ward?) and that she had total control of him, which he would never let me have 🙅🏽

Because I love him.

He had been chasing me for weeks to get in touch, and get news from me and our daughter.

I finally let my walls down, he was telling me about how he still loves me but doesn't want to hurt me, so that we should wait to get back in a relationship.

So, in the meantime I'm trying to get everything ready for our daughter that is 10 weeks away.

I have tried to get him involved, I travelled to go see him. I gave him a list of things he could buy (which, surprisingly not, still hasnt)

What bothers me, is that he will conveniently be "too tired" to have conversations. But still stay online for another 5hours. What he loves doing, is blocking my messages on facebook, or going offline so it always looks like he's been active 1min ago.

Maybe I'm trying too hard, maybe we're not as important?

I have been trying to have an important conversation with him about money for a while, (cause he hasnt bought anything for our baby) and he always disappears.

I think he blocked my number, I blocked him on facebook. I don't really know what to do anymore 😕 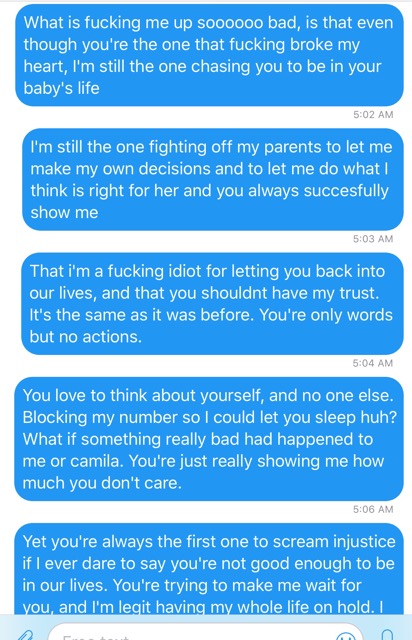 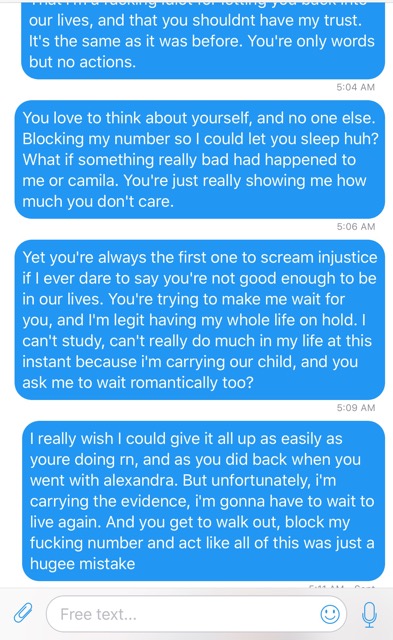 I'm really at the end of my rope, maybe I'm overreacting. Idk anymore.

I'm extra sorry if this is super long, hopefully you have some advice 😫