I gave birth on december 27th to a beautiful baby girl. I am proud to say that I was by myself for 90% of my labor. It wasn't planned, my parents had left town to go to my grand mother's funerals, and just my luck.. my little bean decides it's time!

I woke up on the 26th in the morning, starving, as usual.. and i feel cramps. In my head I'm thinking "yess am I finally going to poo?" 😩

I try, and false alarm. I eat, head back to sleep. I wake up in the afternoon, thinking my cramps had gone away, I cook myself some food and while eating I feel them coming back. I start to suspect maybe I'm going in labor. At my last check up appointment, the doctor had told me I was 75% effaced and dilated at 2cm. And I had been having contractions for 2 weeks before that.

I had false alarms before, so I take a bath, thinking it would calm it down and it didnt.

I went to my room, tried to monitor my contractions for a bit, not knowing what a contraction really felt like. After a couple hours I knew. It was while watching Miss Congeniality that it started getting pretty bad. I called at the hospital around 11pm, and she said I could come in. Having no car, and no one to take me, I had to prepare a smaller bag.. which took me about 30 mins to do. I called a cab and off to the hospital i went. The ride was the longest ever. The driver took a street that has ten thousand stops and lights 🙄🙄🙄

I got to the hospital at 12, and I was dilated at 4cm already. It was all pretty smooth, I was assigned a room, I took a bath.

Looking back, I don't think contractions were that bad, still I decided to get an epidural just to get some rest. Might I add the epidural didn't work... my left leg was out but I could feel everything else hahaha. Around 3am, I was dilated at 5 and I was asked if I wanted them to break my water to accelerate the process. At that point my parents were on their way back from the funerals, so I told the doctors that I would wait. I was dilated at 8cm when they came back around 7am and my parents were finally here. They broke my water, and not too long after I was ready to push. The need to push was so intense, every contractions I was pushing without even trying. 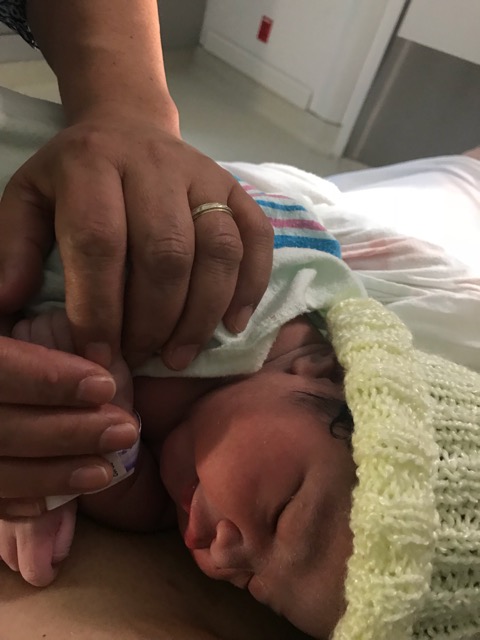 I am hoping to calm down some fellow FTM, I am someone with a lot of anxiety. I had terrible anxiety over how bad giving birth would be. I was able to do it alone, and not to panic. I am proud of myself. Yall can do it moms!!!

P.S. How crazy is it that after all the work and effort you put into making these little creatures they still end up looking exactly like their father!!!!! 🤦🏽‍♀️😂