Labour did not go well at all

Sorry it is a long one. So I had planned out my labour and decided I wanted a water birth. I had it all planned out and was fully aware that it could change and there was a possibility I couldn’t have the water birth I wanted.

I woke up at 1:30am on 25th Jan with contractions so took a bath and paracetamol and sent my husband to work at 6am telling him it would be a while. My MIL came over to support me but the pain got too much at around 7am so I called the maternity ward to see if I could go in. They told me to go straight down so I called my husband asking him to come back and take me to the hospital.

They instantly told me I couldn’t go on the ward I wanted due to high blood pressure and they wanted to keep an eye on me. Luckily there was one room on the ward that had a birthing pool and so they put me in that room. I laboured till about 2 and asked for Gas and air to help with the pain and then started pushing.

I knew that when I was pushing something wasn’t right and I wasn’t getting anywhere but my midwife told me it would take time and I was getting somewhere. I was in such a daze and don’t really remember much about what was going on around me. After 2 hours of pushing the midwife told me to get out of the pool as my contractions had pretty much come to a stop and baby’s heart rate was rising.

I got moved to the bed and examined, and my water then broke. I could feel something wasn’t right and was extremely exhausted and couldn’t physically do anything more. They got me hooked up to check my contractions and baby’s heart rate but all the alarms started going off and before I knew it there were Doctors all around me and midwifes and it got all serious.

They told me they needed to get baby out now and that they were going to do either foreceps or c-section but I would be put under general anaesthetic as I couldn’t have the epidural due to the timing and high blood pressure. I was so gutted as I knew I wasn’t going to see my baby being born and I couldn’t have my husband with me. They wheeled me off and took me to theatre where they stuck so many needles in me and attached me to all these machines and eventually I went off to sleep.

My husband was devastated that he couldn’t witness the birth and he couldn’t be with me to hold my hand. They just left him in the room and I felt awful leaving him by himself when he was in such a state. It was so nice to have him walking in the room as I was coming around and when they wheeled me back to my room, my mum, MIL and FIL where all there waiting for me which was a lovely surprise!

It turned out that my baby was coming out at an angle which is why he wasn’t coming out and started getting distressed and that’s why they had to go for a c-section.

It took my a while to come round and not be in such a daze and I am still remembering bits from the experience now and having to ask my husband whether it happened or whether I dreamt it.

My little Harvey was born at 18:34 weighing a massive 9lb 1oz and I’m so glad he is ok after all that trauma labour! 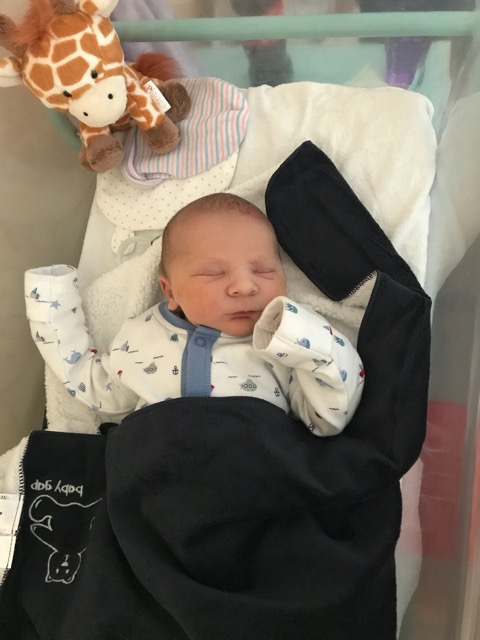