I figured while my son was at the nursery being cooed over by nurses id have a chance to write my story. It all happened so quickly, so its a little blurry so if i write things out of order and i correct them, bare with me ive been given the max dose of pain medicine every chance i could get lol.

So tuesday february 27th was a normal day, was super lazy because on that previous thursday i got nasty sick with a cold. Couldnt breath through my nose, coughing, you know the drill. Well monday comes and i feel better yay. I told my mil (me and my boyfriend arent married, but its easier this way lol) that id feel better by wednesday. Well come tuesday and i feel better but not 100% so i spend all day in my bed doing absolutely nothing until my boyfriend gets home. I dont even make dinner for him *gasp* lol i was 39 weeks exactly, he could kiss my ass. 🙃 at about 10pm that night, i crave pineapple. So i go and get my last can of crushed pineapple. Now i know this probably didnt do a single thing, but i dont care ill always believe that can of pineapple started things along. Now my boyfriend is passed out immediately and im laying in bed playing on my phone watching greys anatomy like usual and then my lower back starts hurting, like usual. Then at about 12am, it wasnt usual, it was very very different. At about 2am i was over it, took a hot bath, a hot shower, bounced on my ball, and finally laid down with one of those neck massagers that look like a tiny boppy pillow, i took a tylonal (no idea the mg, but just took 1) and fell asleep. My boyfriend was supposed to get up at 8 but his alarm went off at 7 on accident and woke us up and he decides he didnt want to go into work that day, that he was going to call and say i had a doctors appointment. Okay no problem i didnt care, i was so bored being home alone sense he started taking my car because i was no longer working and apparently its his car now, lol. At 7 am i started to bawl my eyes out, my back hurt! I had him use counter pressure with his knuckles, but it was consistent and it hurt. Bad.

He calls his mom about 9am (this is where times get a bit fuzzy, things went by fast so i may not be 100% sure on times and measurements)

My hospital is about 45-60 mins away from where i live, so it was a "get everything in the car and lets go" type of ordeal. I didnt grab everything i wanted to grab because i was almost certain i was not in labor. I was 39+1 and bub was supposed to come on the 6th of march, it was still feb! So i was in denial and left the car seat 😂 we drop my two dogs off at mil house and off we go on our drive. About 15 minutes into the drive, the contractions started. Every 5 minutes lasting for 1 minute and 10 seconds. Oh before we had left we let my doctor know and she said to go ahead and go to the hospital that theyd be waiting for me because we live so far away, anywho about 1030 am we get to the hospital to get checked, and i had 6 contractions in the time we get there and the time i get admitted, which was about 11am. In complete denial, i was at a 4cm, which i was at a 3cm at my last appointment a week earlier, i had been progressing 1cm a week. Woohoo right? Oh boy. At 11:30 my doctor comes in and breaks my water, im at a 6cm by then 😐. I ask for iv pain meds and that helped really well. For an hour. By the time they got me hooked up to the iv, the monitor, the medicine, my dad, stepmom, mom, mother in law and her husband had all shown up. I was feeling nice, talking away saying how i cant believe how fast this was going, only could count contractions for 2 hours and was already a 6. Wow first time mommy over here and im 4'11 tall and prepregnancy i was 96 pounds. 21 years old.Keep that in mind, lol.

Well everybody went off on their way to go to the store and eat and whatever, which was about 1230. And that was when the iv meds wore off, and i had a consistent contraction starting at 1230, and lasting up until 1:15pm when i was SCREAMING for the epidural i didnt want to originally get. I was so afraid but i was screaming in pain, i had no choice.

At about 130 everything was all set, and i was a happy camper before they even set me down on my back, it was not bad. I was able to breathe through the contractions and them hitting my spine was nothing. They checked me and i was at an 8cm already, placed my cath and were on their way.

Everybody came back in and at 230 i called and said there was slight pressure (turns out gas is fun with an epi) and was a 9cm. An hour later i was at a 9.5 cm. I was stuck at 9.5cm until about 7pm that evening. I was doped out so i didnt care, but everybody was antsy. By then it was shift change and the nurse suggested i lay on my side to get the last tiny lip to go away. Well by 730pm that did the trick and bubby was ready. Everybody but my boyfriend left and it was time to practice push. It took about 30 mins to push correctly, but at about 830 they called my doctor in. I pushed for 2 hours, i was pushing well, just i was holding off because i was afraid of a bm 😂 then shit got real and it started to hurt. The epi only numbed my belly so i felt everything. About 9pm i started to get tired and just wanted my guy out. I started to get his head down where they could see hair, and thats when it got painful. About 915 i got to the point to where he was coming down and it burned bad. Kept pushing and i wasnt breaking inbetween, i was just going for it, set after set, screaming at the top of my lungs "get out of me"😂🤦🏼‍♀️

At about 930, i discovered the ring of fire, and guys that shit is REAL! I was screaming so loud my face was swollen. I was screaming at the top of my lungs words i dont even remember and at 945 pm my handsome little guy finally was able to come out. 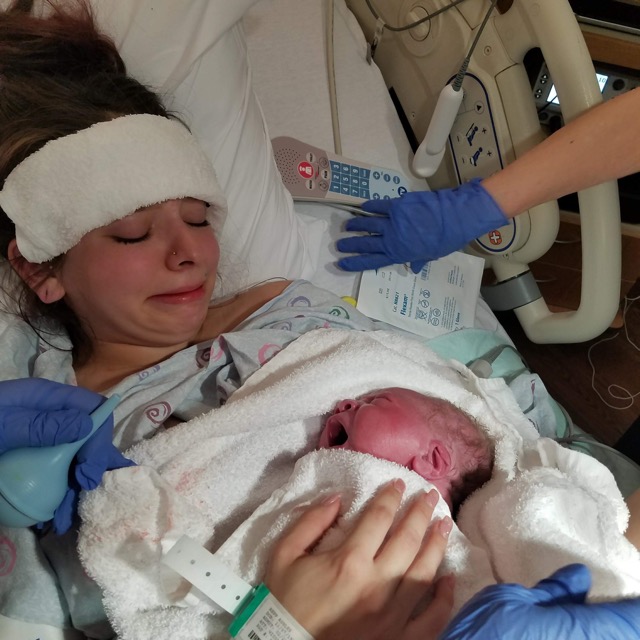 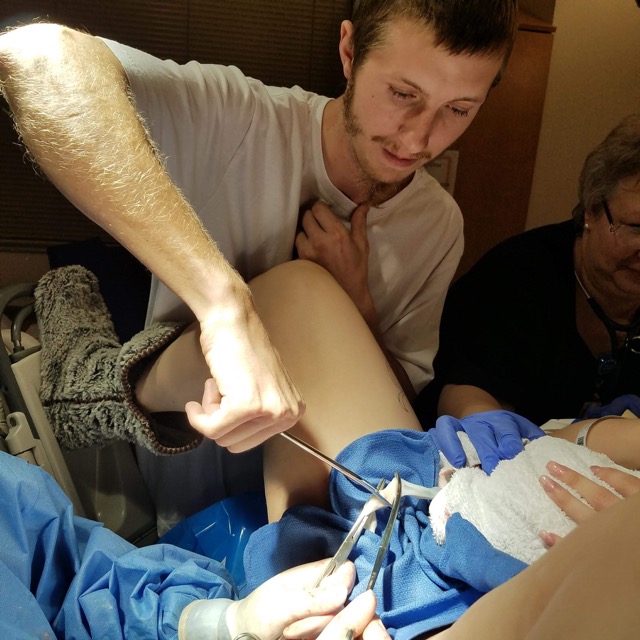 He was perfect, crying so loud and being perfect. I kept crying and asking if i scared the other ladies giving birth on the floor. Lol they took him to do his thing and they worked on me, i had two 1 degree tears and needed 3 stitches. Placenta cane out in a tug.

Thomas John was finally here at 39 weeks 1 day, weighing 7 pounds 7oz and 19.5 inches long. My tiny vagina and pelvis made it! But not without a vengeance. Its now the 2nd of march and i finally got 3 hrs of sleep after not sleeping sense the 2am-7am window i slept while having contractions. My theory was if i dont get down, i wont have a hard time getting up. It worked, i was able to walk around and keep up but ladies you have to take it easy. It hurts to give birth. Recovery hurts. Its been hard on me, but ive been taking advantage of the pain medicine. Let the nurses help you, its what they are there for. They will teach you how to wipey their butt and swaddle them perfect. They are there to help so let them help you!

I am so sorry this is a super long story, but i wanted to be as detailed as possible! I hope you guys enjoy and if you read all this, yay! I didnt expect you to. I love long birth stories and i cut a lot of detail out lol.

Enjoy some pictures (oh and btw, breastfeeding like a pro!) 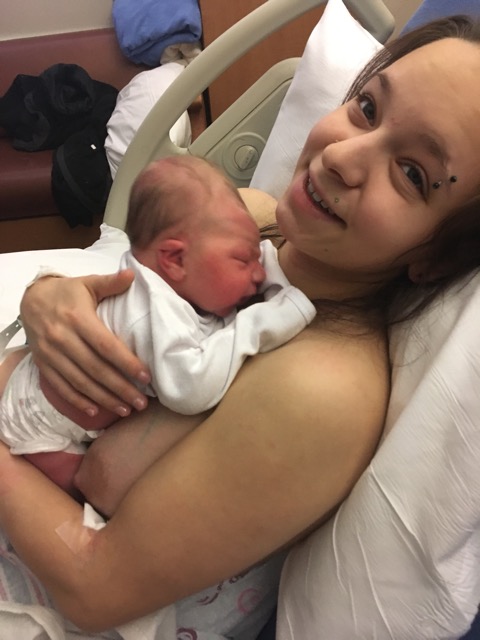 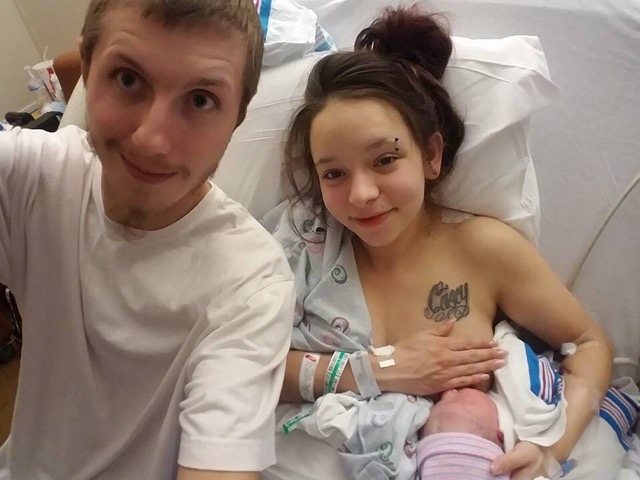 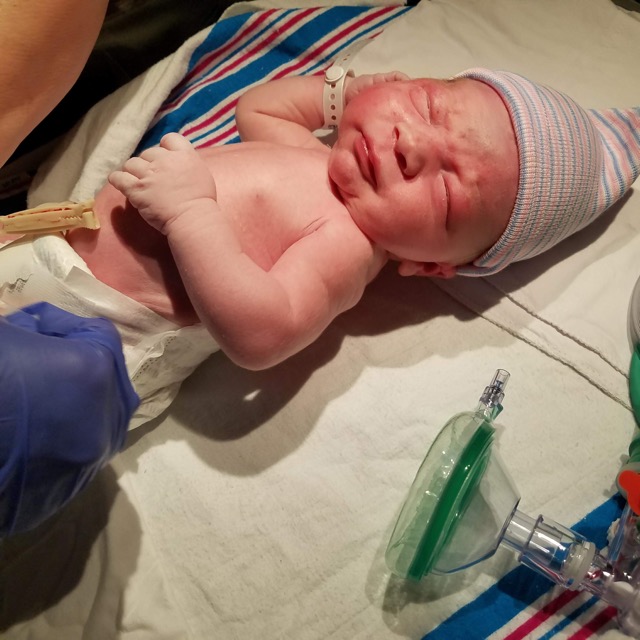 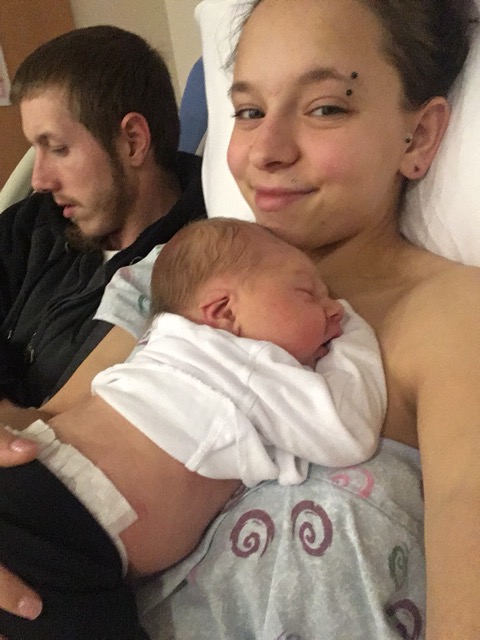 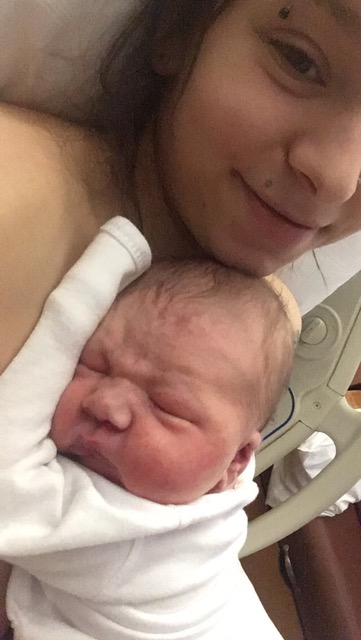 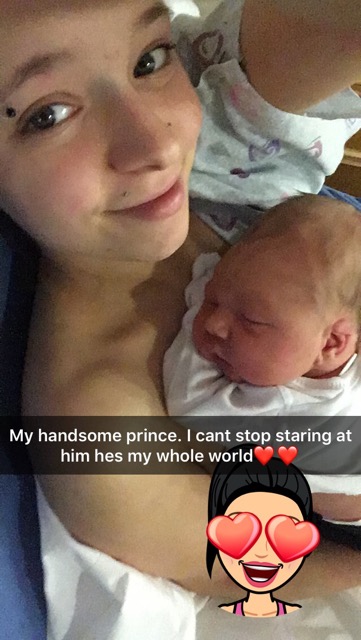