So we have one dog. I say we but she's my husband's. We can't stand each other, which is fine since she's an outside dog now. I told my husband I wanted a dog. Didn't have to be soon beings as I'm nearly seven months pregnant but that I was going to start looking since I knew it would take awhile. I really wanted a tan and white male corgi. Something small I would feel comfortable keeping inside with my children. I knew this would take awhile, especially to find one for less than four hundred dollars.

Yesterday, we were helping my husband's friend and family move (ten of them all together, including two babies). While two of the guys were carrying stuff in off the U-Haul, I hear them say something about stray dog. I see this cute little guy and my heart just melts. The guys have the door open and he just walks right up to me. I pick him up and hold him for a good twenty minutes. It's then determined I need to save this dog. He's not had a bath probably ever (puppy still), he's not being fed right, he's skittish, he has to be a stray. My husband gets back with his friend from unloading one of the U-Hauls into a storage unit and sees the puppy. I had been texting him about this little dog that needed me. I truly believe God sent him to me, we needed each other. I told my husband that even if we don't keep him, I'm taking him and will find him a home. But my husband says I now have a dog! He's so sweet and gentle and even plays with my two year old. I think He's going to be a great addition to our family. 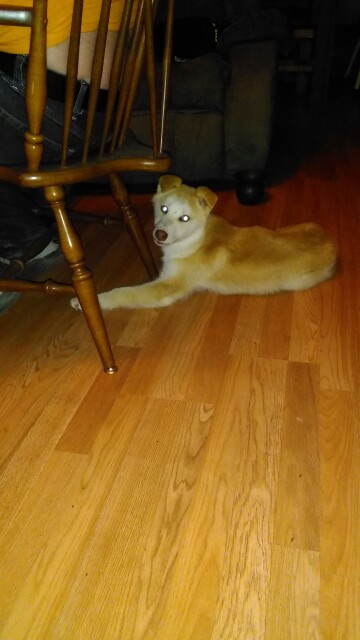 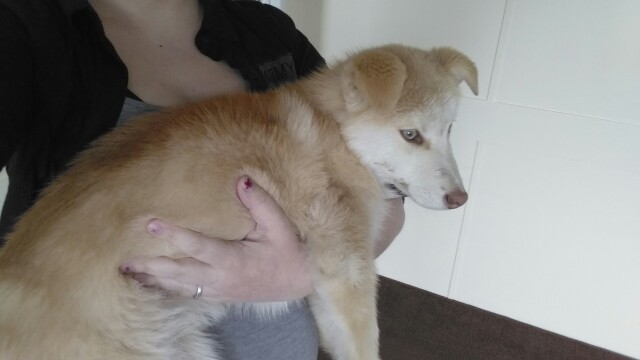 Update: No one's claiming him. He just finished his dewormer treatment yesterday. He's got a case of ringworm on his muzzle that we're going to start treatment for today. He's even doing really good with potty training. We had a ton of errands to run yesterday, so we had to leave him home in a kennel. No accidents thankfully since bath time is awful for him. He's starting to act a lot better too, so much more energy. Everyone we've showed him off to absolutely loves him. If we do get to keep him, he's going to be such a great addition to our little family. 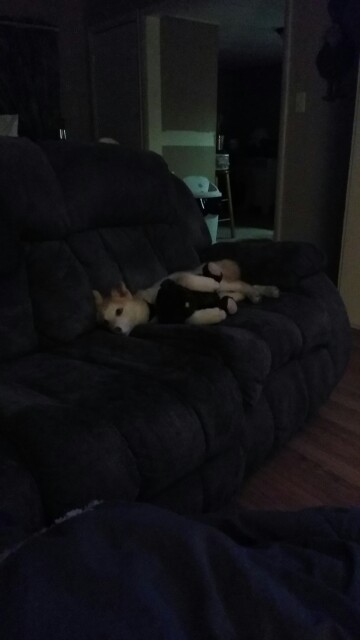 Beau with his teddy bear 🤗

EDIT: What's wrong with you people? I've gotten just as much negativity from this post as I have positivity. Y'all are acting like I'm the worst person in the world for having my husband's incredible destructive dog outside. It's not like she's not getting taken care of. It was the best thing we could do for her. She's an "aggressive breed", so not very many people would've taken her had we decided to rehome her. She pukes almost every day for no medical reason, poops in the house all the time even though she's taken outside to potty constantly, never took to training. I thought moving her outside was a better option than her getting euthanized, y'all look foolish for assuming I just threw her outside because I didn't feel like dealing with her or because I hate her. The dog I rescued IS a stray, I went to the area I found him and asked several people about him. He'd been running around that area for a couple months now, no collar, not taken care of, never seen with an owner. He's not even six months old, probably never had a home, was starving when I found him. I was expecting a different reaction from this post, beings as all I was doing was trying to save this sweet little dog's life. He's mostly husky, the state I live in doesn't stay forty degrees year round so he'll have to be an inside dog. I'm prepared to own a high strung dog, both my husband's family and my own have a ton of property we'll be able to let him run around at. He is smart, almost potty trained already, does fine with a crate, done with the dewormer treatment I got him, is being treated now for a case of ringworm on his muzzle, is being well taken care of. I'm going to be frank and ask if people have something negative to say to this post, don't bother since other users have already got it covered and it's unnecessary. I appreciate the concern people have beings as I did say I didn't want to own another large breed dog, but it's not that I can't or am unprepared to do so. Both the new inside dog and outside dog are being very well taken care of, and will continue to be. Thanks for reading, if you've gotten this far.