My husband is always doing small things to make me doubt him, but in our five years of being together I have never caught him cheating and nobody has ever said anything to me. Everyone thinks he is great. He is great. Buuuuuut...

He will call other women “sweetie” and “hon.” He tells other women that they look “sexy” because he says it boosts their confidence. He collects Playboys because he appreciates the female form. He just acts like a fucking scumbag when it comes to being flirty with women, like a 1970’s used car salesman. It’s the only area of his life like this. Again, everyone loves him and he never goes “too far,” just enough to make me super uncomfortable.

Every time something makes me uncomfortable, I say something, and he stops. He never called another woman sexy in front of me again. He boxed his Playboys up. He came up with a special pet name only for me. But I still feel like he is just being scummy.

Today I was browsing through his liked posts on Instagram and found this: 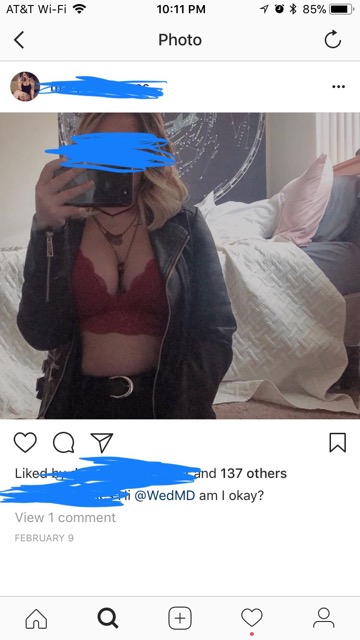 It is his coworker. This is from my account but on his account he has it hearted/liked.

This photo is public.

Him liking this photo is public.

There isn’t really anything “bad” about it.

This is his employee, he is her manager.

He showed me a photo of her tattoo before

When confronted, he saw no issue and thought I was overreacting to “nothing.”