So, after 15 months, it finally happened..

Visceral Mercenary • Tue, Mar 27 • This is definitely the darkest timeline.

Someone put their hands all over my kid, without speaking so much as a word to me.

I was at a self-checkout and about. halfway through, a lady, her three young kids, and a baby in a car seat get in line behind me.

I'm minding my own business, scanning my product when I notice out the corner of my eye that this woman is standing practically on top of my kid. So, I turn to see what the fuck she's doing because I don't like people standing within snatching distance.

My son is sitting in the seat of the cart and she's two inches from his face, one hand on my cart, and the other touching my son's hands and face. He's TERRIFIED of strangers in the way that if someone gets within a foot of him, he might start crying. Poor kid must have been frozen in fear because he didn't even make a peep.

I don't even have to say shit to her because I turn around pretty much like this:

And she backs the hell up and doesn't even look at him again. So she clearly knew what she was doing wasn't okay if she stopped when she got caught. And get this: her baby is in a car seat with a cover on it, so she clearly doesn't want people touching HER baby but it's okay for her to touch other people's babies.

I don't know her from a hole in the wall. I don't know if she washes her hands after she uses the bathroom or if her kids are sick, yet she's putting her germy digits on my son's hands (which, FYI, toddlers put in their mouths A LOT.) I worried about this happening when he was a baby, but I thought the danger had passed. Seriously, who thinks it's okay to touch other people's kids? He's human too! He deserves personal space. I mean, ffs, most people wouldn't even just start touching a strangers dog, much less their kid!

That happened 5 hours ago and I'm still mad. I just don't understand why someone would think that they are entitled to put their hands on someone else, even when that someone is a baby. I mean, I know he is cute, but he does not have a sign around his neck that says "Free Petting Zoo."

On a related note, my cousin once had a stranger snatch her friends baby out of her hands because she wanted to hold her.

Picture of my little boy, just because: 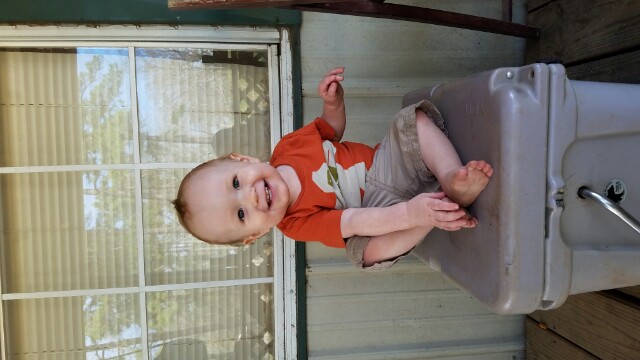 Who's had something similar happen to them? And if you are the type of person. that does this, why do you think it's okay?