So relieved to have had an early scan today (private vs NHS for those of you in the U.K.). We had a mc at 5 weeks last year so although everything had seemed ok so far this time, we were desperate for some early reassurance but our local hospital is v overstretched and would only offer them in an emergency. Then on Friday morning I found a lot of fresh red period-like blood after wiping on the toilet and was so worried and upset. We both thought it was time to prepare for the worst, but it seemed to just be that one wipe, no pain, nothing else. We phoned the hospital and the midwife suggested possible subchorionic haematoma but not to rush in unless symptoms changed. Was worried I hadnt felt my usual nausea or sore boobs, but was massively over-thinking everything and urine tests were still showing strong positives. They booked us an emergency NHS scan for next Tuesday, but said feel free to go for our private one in the mean time (but to cancel and free up their

one if we no longer needed it by Tues).

After the most anxious 24hrs - with no other bleeding other than that one random isolated episode - we saw our tiny bean this afternoon - right on size for the date, with a 176 heartbeat and no evidence of clots or SH or problems so far. I couldn't even look at the screen - had to just watch my husbands face until I saw him smile a smile I've never seen on him before, then knew it was ok to look over and see for myself (and promptly burst out crying in relief). Shit just got so much more real!

Next step - all the usual blood tests next thurs, and keep everything crossed until the 12 week scan. Wanted to share in case others experience random bleeds, or are considering a private scan whilst waiting for free NHS scans (and we're not telling many people yet, so it's good to be able to write all this down somewhere!) Lots of love and luck, ladies x 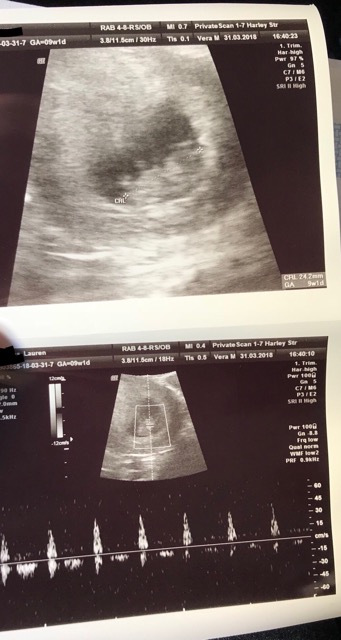