My "mom" straight up ABANDONED me and my sister when we were kids. From 5yo - 9yo I never once talked to or seen her by her own choice. She finally came around and I moved in with her over the summer to try to develop a relationship. All she did was use me as a live in babysitter while being both mentally and physically abusive. After her baby dad molested me and she treated me like I was a liar, I moved back in with my dad and she told me I can fuck off until I'm 18. So once again she up and abandoned me from 10yo - 16yo. She only came back around after finding out I was pregnant with my son. All of a sudden she wanted to be involved and play grandma and mom. It of course didn't last. She stopped contacting me again, and I didn't talk to her for another 3 years. At 19 I got an invoice from a collection agency saying I owed over $700 on an electric bill for an address I NEVER lived at. After some digging I found out it was an old address of hers, and I was only 13 at the time the bill was issued. I reached out to her on Facebook telling her she needs to pay it, because if not the only solution I have is pressing charges for identifying theft/fraud in order to have the bill taken out of my name. She blew up on me, telling me I don't care about her, I'm a pos, once again saying I'm a liar and lied about being molested, etc. She agreed to pay the bill and did, but I cut her off because of the things she had said. Well from 19-24 I had absolutely nothing to do with her. I only recently got back in contact because I had found out that my 15yo sister was having issues at home, and was at risk of being sent from Ohio to Texas to live in a group home because our mom couldn't care for her anymore. I offered to house her, and started the process of becoming her legal guardian. Before the process could be finished, my sister was arrested and charged with a domestic violence and assault charge against me and my fiance for attacking us during an argument. Well despite my judgement I believed my mom when she said she wanted to make things better and work on our relationship. Things WERE going okay until recently. I'm 33 weeks pregnant, work 70 hours a week, and have two kids. She started accusing me of not caring about her because I don't contact her on a regular basis. She lives an hour away, and with everything going on I just don't have time or energy to constantly make plans or call her every damn day. I asked her if she wanted to co host my baby shower with my fiance's mom, she said yes but has put NO effort into helping. Then recently she told me she may not even be there. Despite that I let it go, never once got mad, and then I get these texts while Im at work. She's mad because I didn't say Happy Mother's Day. Like fuck you dude. I'm done. Over it. Not letting her do this to me any longer. Bye bitch. 🖕🖕🖕 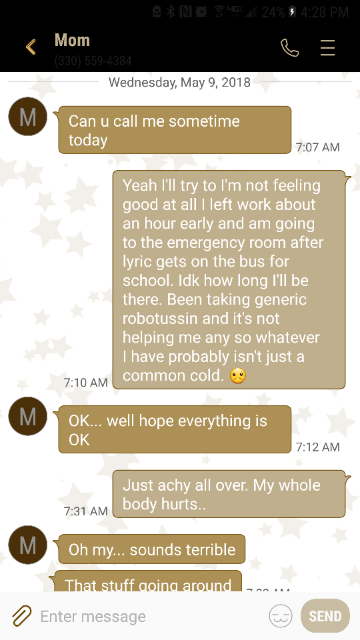 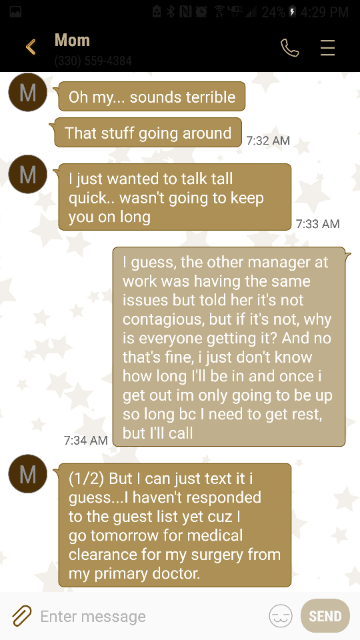 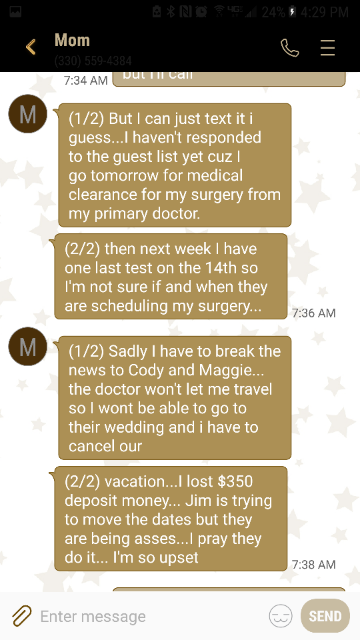 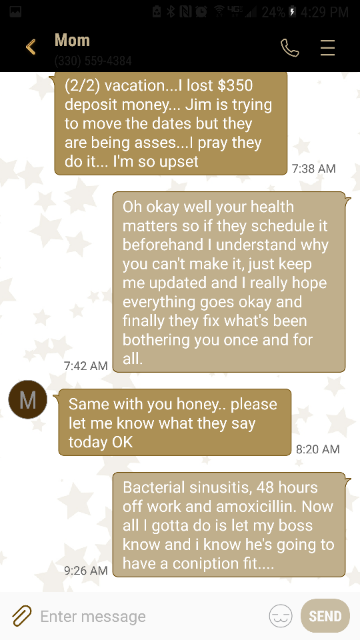 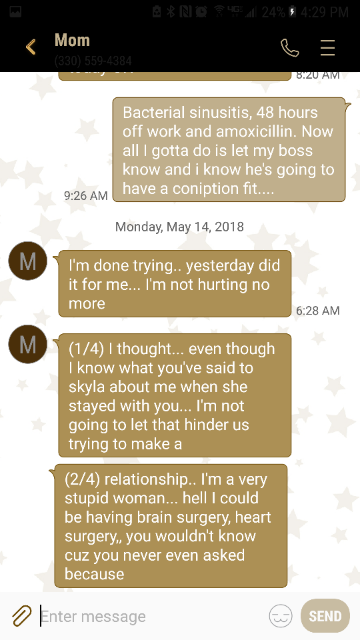 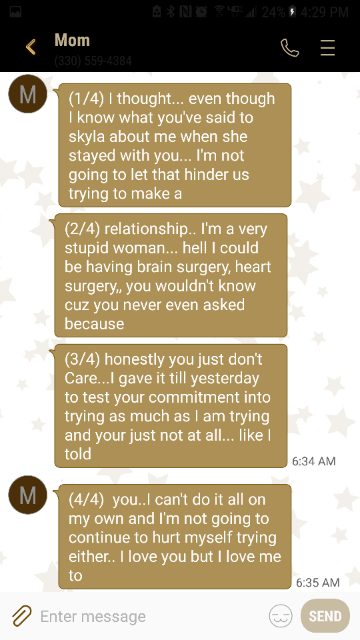 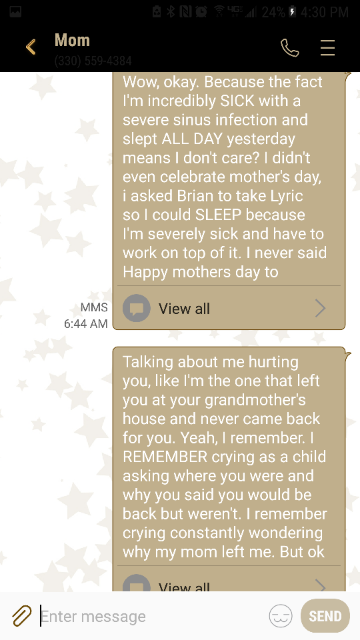 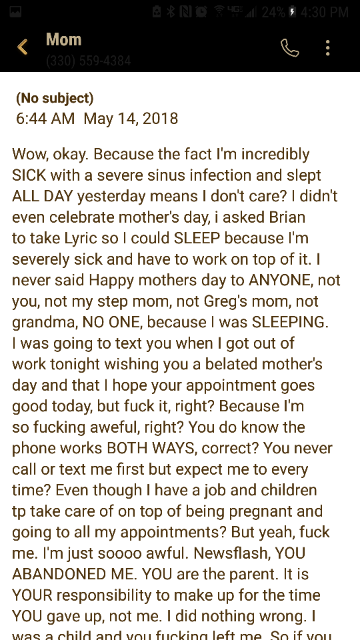 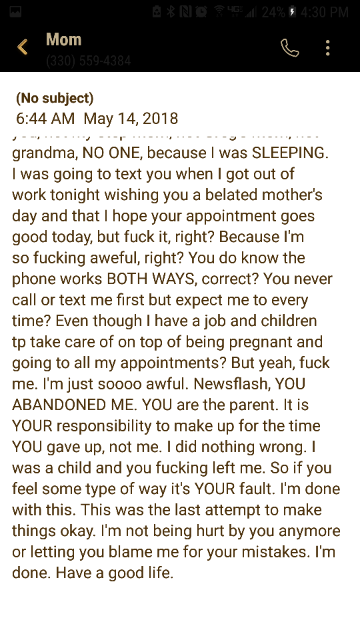 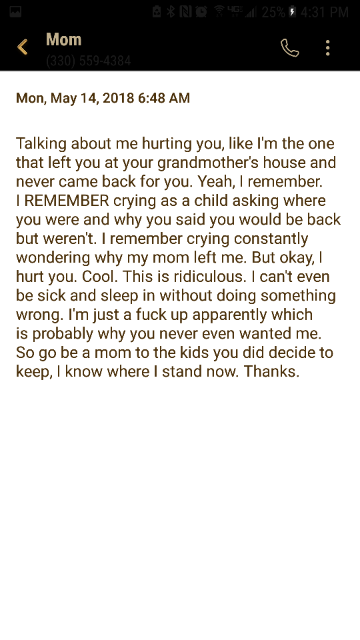 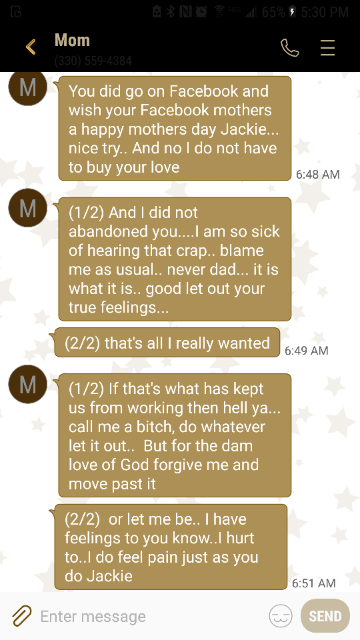 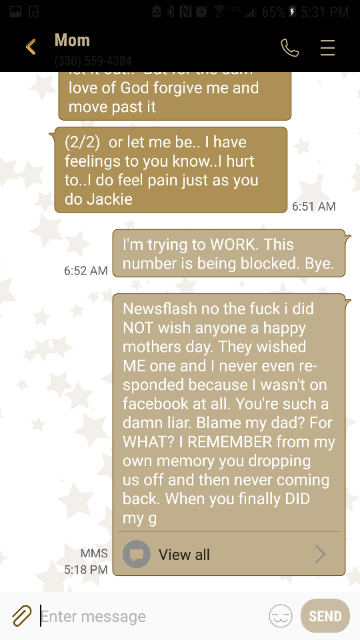 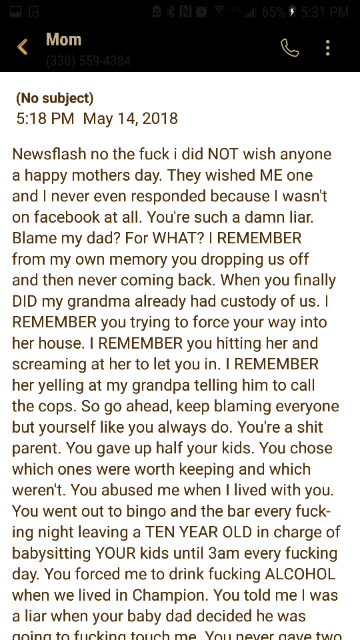 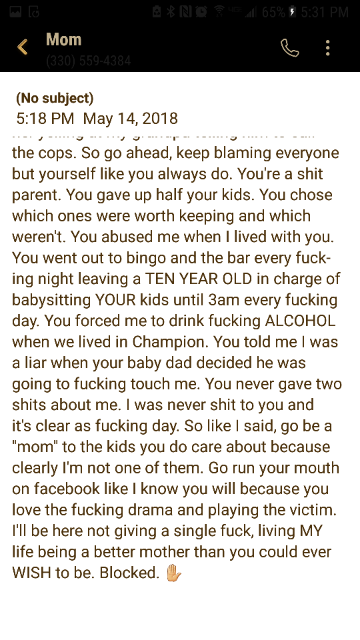 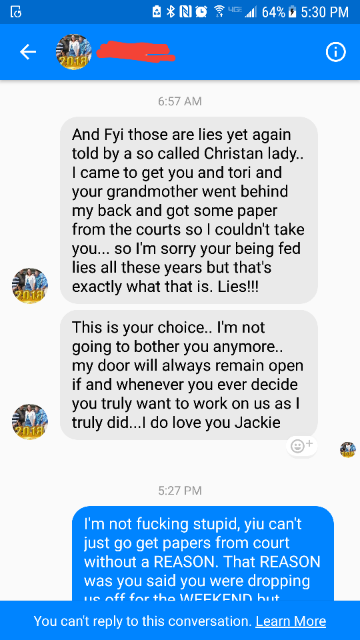 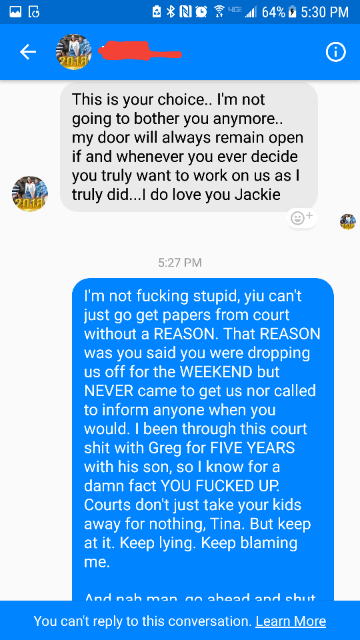 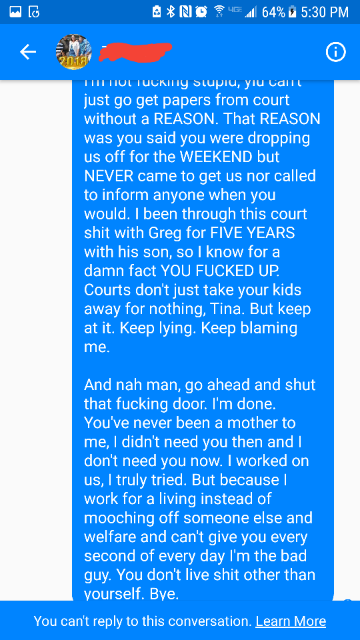 She's never had a job, she jumps from man to man to pay her bills, she lies to welfare to get money and benefits she doesn't qualify for, she has EIGHT kids and abandoned FOUR of us...like no. Go play best mom of the year on Facebook and act like you're so amazing. You ain't shit. 👎😂