I’m a first time mom & let me say I had no idea the process of “induction”.

My babe had been measuring small my entire pregnancy and they were concerned about intrauterine growth restriction. They had mentioned she could just be constitutionally small, but at my 37 week appointment with maternal fetal medicine they decided officially IUGR. So they planned to have me induced at 38 weeks. We were excited and nervous all at the same time. I was ready to be done with work and ready to be done being pregnant.

We went into the hospital at 7AM on Friday May 18. They gave me 3 pills vaginally of cytotec or some cervix softener every 4 hours... after all that time I only progressed to 2cm. I had only mild on and off cramping with the first 2 pills. The nurse finally did some “swirling” of my cervix which hurt really bad and that started consistent contractions. Which felt like a really intense period. She then started me on pitocin.

After a little while on pitocin I asked for an epidural because I was in such pain. The epidural guy arrived and that wasn’t as bad as I thought but a little scary. Once that was done I was much more comfortable. They continued to increase the pitocin but baby’s heart would drop a little with it and she wasn’t responding well to it - so they would turn it down and keep repositioning me.

The next morning the dr came and checked me and said I was barely dilated to 3. It was incredibly frustrating and I was becoming so so exhausted. Since I already had contractions they couldn’t give me another pill vaginally. The doctor suggested breaking my water. Mentally and emotionally at this point I was so ready to be done.

My husband and I decided we’d have my water broken and see how much is progress in 4 hours. When they checked me I was 5cm and the doctor said it would be 1cm every hour and potentially I could be ready to push by evening. *if* my body cooperated. The idea of waiting that long and then still possibly not being ready sent me over the edge. We were offered a c section and soon after that decision we got to meet our baby girl on May 19.

It’s been an emotional week and I’ve been having a lot of guilt for not just waiting to see if my body would’ve progressed on its own so I could have a vaginal birth.

All that matters is she’s here and she’s teeny but perfect. She ended up NOT having IUGR and was just constitutionally small. 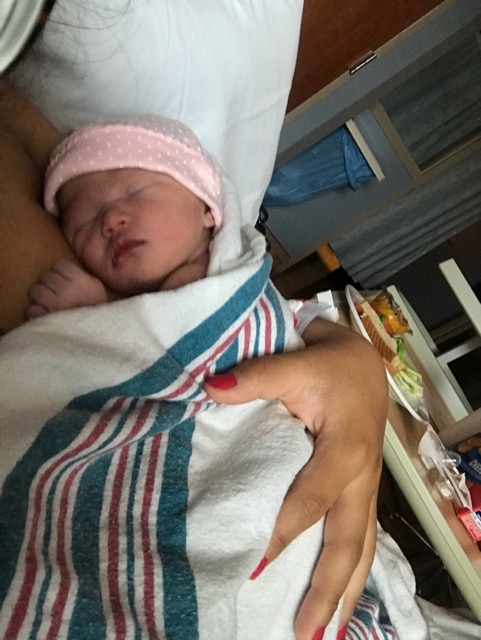