September 12th: I was 35 weeks, 2 days. I woke up around 2:45am to use the bathroom. I got back to the bedroom and was just about to crawl back into bed when I felt the gush. I hurried back to the bathroom. My water had ruptured around 2:50am. I called down to my husband who had fallen asleep on the couch.

We have two dogs, so he thought maybe one of them threw up or something and I didn’t want to get down on the floor to clean it (which if you’re a dog

owner you know 90% of the time this happens in the middle of the night or at inconvenient times) So when I said my water broke he sprung into action.

I called the local hospital but because he was preterm they told me to go directly to the larger hospital an hour away because they have a NICU. But because my mother delivered two babies in record time, my husband didn’t want to drive the hour and have a “highway baby”. So we went to the local hospital.

The only negative of my birth story is that the on call doctor scolded us for that decision- saying we just wasted our time. I think what she was really thinking is that we wasted hers. But let’s not dwell on that.

I was taken by ambulance to the larger hospital and was brought to triage. I was 1.5 cm dilated and almost completely effaced. Because I had ruptured my sac they said they wouldn’t be checking often to avoid infection.

They weren’t able to access any of my records from my original hospital so lots of repeated questions.

My contractions were starting to get stronger. The rest is a bit of a whirlwind and all blurs together.

At some point I did get a room, and I did take medication for the pain. It helped a little for a little while.

As contractions started getting even stronger and closer together, I opted for the epidural. As they were getting ready and setting up, I said I felt the need to push. They checked me and I was I think 7 cm dilated. They got the epidural in and very soon after I was fully dilated and ready to push. I almost waited too long to ask for the epidural!

My husband and a nurse or doctor held my legs up for me as I pushed.

Because I was at a larger hospital, there were so many individuals in the room, some learning what to do, others observed, and I think the NICU team was there waiting.

I don’t know how long but it didn’t take me long once I was pushing.

They asked me if I wanted to feel his head- and that was the best thing I could have ever done. It motivated me because he was right there and he was very real. I think two or three more sets of pushing and he was delivered. 2:17pm that same day (just under 12 hours from my water breaking) 6lbs, 5oz, 19inches long

I was able to hold him for only minutes before the NICU team gently took him from me. I was thankful a doctor asked to get a photo of my husband holding him for the first time before he went up to NICU because I was not thinking about that and we would have otherwise missed that moment.

My baby had to stay in NICU until the next evening but was then able to join me in my room.

I was discharged two days later but my little man had to stay a few days longer. I took him home September 17th. Him staying at the hospital was one of the most stressful things for me. I wanted to be with him (which I could be because they gave me a boarding room) but I wanted to be home in my own space with my husband and dogs too. I can’t imagine what it would be like for those families that stay in the NICU longer!

But now we are all home and enjoying every moment!! 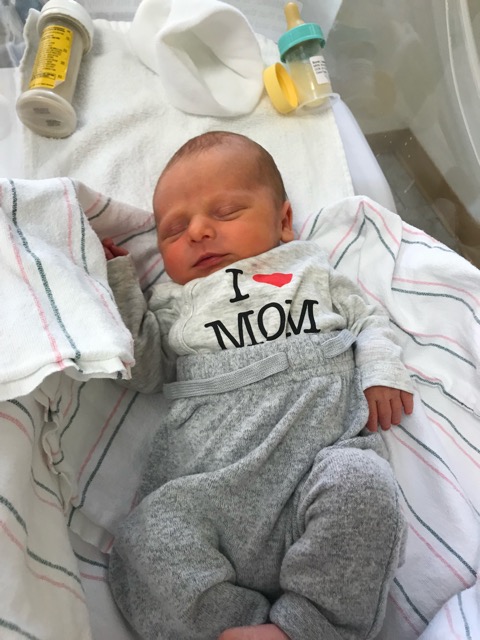