PLEASE NO NEGATIVITY COMMENTS PLSSS I JUSS NEED TO RELAX MY MIND BECAUSE IM JUS CRYING !!

So my fiancé got invited to a bbq and it’s free and he don’t want me to go with him & I feel like he is embarrass or a shame to walk with me into a party everytime he go with his brother not me..ITS A FREE THING OTHER COUPLES PROBLABY GONNA TAKE THEIR GIRL OR WIFE HE JUS DONT WANNA TAKE ME ..He said he he doesn’t take me with him anywhere because I control him everytime wen he goes out ..1 I do get mad wen he goes out and comes late because he stays out there and ignores my phone calls or txt and wen I need him wen he’s out he’s not there for me ..Like this passed Friday I was in the hospital all alone with a pain abscess and they had to put a needle in me with anesthesia and cut it to make a lil hole to drain it I wanted him to be there with me & he wasn’t he decided that keep hanging out with his friend which I told him I wanted him to go with me or take me but no he decides to pick me up afterwards and stay hanging out till like an hour before I came out .. I was all alone in the hospital bed feeling the pressure to everything they were doing to me tested and so nervous & scared..I’m doing so much better it’s healing and closing he took me shopping to get bras yesterday and he bought himself and outfit to go out for today ..But the thing is we have a 1 year old son ..His mom said the ladies who party when they have kids is a bitch only bitches party when they have kids because they like other intention trynna get sex from men, but I am a wife and I need to stay home & take care of my kid ..I told her that’s not the problem the problem is that I feel like he is a shame of me going out with him he said if I keep controlling his life he gonna brake up with me because he said that’s everytime and he has to go to places mad 😡 and then he had to drink to ware it off and forget what we talked about earlier..Since a year guys my son born I haven’t do nth nth nth ..My son was in 3 weeks vacation with mother in law and during the 3 weeks we work & were off the weekends I told him let go out to a bar or any lounge and have a good time he refuse and said no ..Now he is going to a bbq and a free one n argues with me I control his life wen he can be a man and take his wife to enjoy time which I have never done that with him only once that was before I had my son and that day he made me cried because he thought I was looking at people even to my prom to in June 2016..My son is 18 months I haven’t get that time to go out to a party with him because he jus don’t wanna bring me but he brings his brother all the time..AM I WRONG FOR TRYNNA STOP HIM FOR GOING TO PLACES OR I SHOULD LET HIM GO AND BE A HOME WIFE ???

IM CRYING WRITING THIS RIGHT NEXT TO MY SON BECAUSE MY MIND IS LOOSING AND I JUS DONT FEEL LIKE MYSELF I FEEL LIKE SHIT AND NOT WORTH NTH..I DONT WANT US TO BREAK UP BECAUSE HE FEELS LIKE IM TRYNNA CONTROL HIM THE ONLY THING I WANNA KNOW IS HE A SHAME OR EMBARRASS TO TAKE ME TO A PARTY WITH HIM TO HAVE A GOOD TIME..OR IF HES A SHAME OR FEEL SOME TYPE AWAY WITH ME WALKING TO A PARTY ??

THE ONLY THING I WANNA DO IS GO AND HAVE A GOOD TIME WITH HIM AND ENJOY BUT NO HE DONT WANT TO TAKE ME I HOLY GOT NO FRIENDS MAYBE 3 AND I DONT DO NTH FUN WITH MYSELF OR GO ANYWHERE FUN ON MY OWN BUT HES GONNA ENJOY TONIGHT WITH MUSIC FOOD AND PEOPLE DANCING HE DRINKING LAUGHING AND GIGGLING AND IM HERE HOME CRYING BEING MISERABLE DOING NTH RELAXING WITH MY SON..

I DONT WANT US TO BREAK BUT I DONT SEE WHY HE CANT TAKE ME TO HAVE A GOOD TIME WITH HIM IF I WOULD GO OUT WITH HIM SOMETIMES I WOULDNT ASK HIM TO GO OUT I WOULD IF LET HIM JUS GO BUT NO HE NEVER EVER TAKES ME OUT TO A PARTY WITH HIM..GIRLS BEFORE ME THE BITCH HE CHEATED ME WITH LONG TIME AGO HE WENT TO THE HOOKAH LOUNGE WITH HER TO A PARTY HE HAS NEVER DONE THOSE KIND OF THINGS WITH ME !! 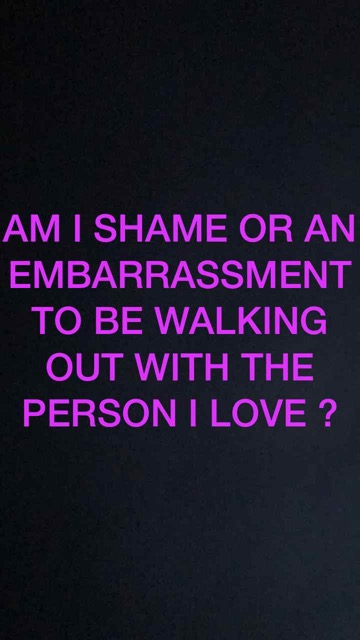