Accidentally found out gender at 30 weeks!!!

Wellllllllll we were not really planning on finding out the gender of the baby until birth, and so this was an accident 😂

I went for a follow up ultrasound to my anatomy scan when the peekaboo happened.

At my original anatomy scan, I wanted to keep on the monitor to watch it because I do love seeing the babies do their thing in utero, like sucking their thumbs, stretching, sticking their tongues out, drinking fluid, just seeing the baby in general 😍 etc. I told myself if the baby were to suddenly move and expose anything then its because it just happened and it was meant to be lol. But I asked her not go out of her way to see it or try to get all in there if she doesnt have to for any medical reason. The tech we had mentioned has 30yrs experience with US, so she assured us she could do everything without having to see it. And she did.

So we walked out that day at 20 weeks not knowing what the gender was. My hubby and I started to feel the thrill of that and also developed more patience towards it since we are getting closer to the end. So on the report for the US it said I actually needed to schedule a follow up because I had marginal placenta previa, which my placenta was just barely touching my cervix and needed to move up and out of the way so when the baby is born it doesnt risk bleeding on my end if the baby aggitates it or damages it during the birth process. Also, my babe was measuring really small (which hubby and i are small ppl anyway) and I needed to re-check on that too. SOOOO I go to the Follow up ultrasound at 30 weeks.

Turns out everything looked great! Baby had now jumped way higher in percentiles, was head down, looked 100% healthy, and the placenta had moved out of the way as the uterus grew a bit. Last thing the tech was finishing during the scan was checking on growth (percentiles). She had to measure the femur bones for that part and she was doing great until.................

The baby suddenly spread its legs wide open clear as day on the screen. Both the sonographer and I looked at each other then back on the screen. I said, “I can’t un-see what I saw. No boy parts” 😂 she agreed - “Nope, no boy parts!” She said. And then I said “omg Im having a daughter”.

I have two sons and my youngest is a girl. I started to feel so complete immediately. And im so happy for my daughter to have a sister!!! I did’nt even feel mad or upset about finding out, as I thought I would - im actually super happy!!

Once finding this info out I was not able to keep it to myself. Too much pressure. I told my hubby and we decided to reveal it to our immediate family the next day. We used a huge bouqet of pink flowers to reveal it and I still have it, it reminds me of HER ❤️ still weird to say “her”. And just this week we chose a name for her. 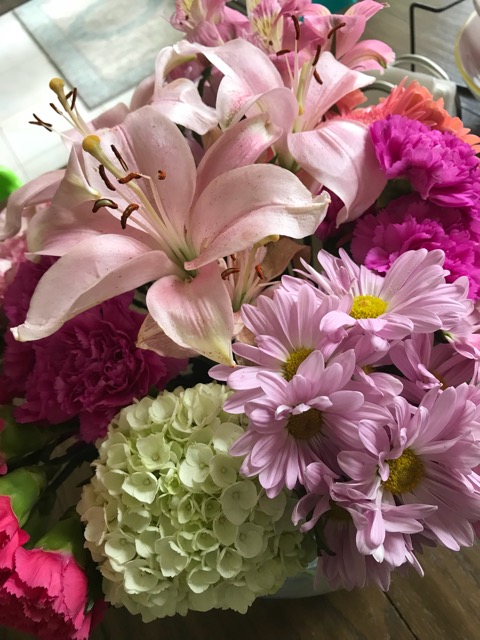