Wishing for rainbows, the story of my miscarriage

Sorry this is so long but I needed to get it off my chest.

I had an early miscarriage on October 3rd. I lost our baby at 5 weeks 6 days by lmp (we never got to be dated by an ultrasound). I know it must be so hard when you loose your baby later but I hate when people say "well at least it was early..." It doesn't matter how early it is, they were my child and they are gone... It was a future we lost, not a bundle of cells. It is missing out on all of the milestones and never getting to see them or touch their little face or tickle their toes.

I got a positive pregnancy test on september 25th and that began almost the longest two weeks of my life. The minute I saw those two lines I was ECSTATIC!! We were pregnant with our second child ♥️ the last month trying naturally before starting chlomid! We did it!!!! ♥️ A big fat screw you to my stage 4 endometriosis and ovarian cysts 🖕 I was a little worried because my daughter has a severe congenital heart defect and our risk is slightly elevated to have another heart baby, but it is only 2%.

Never did I think that the pregnancy would end in a miscarriage. I mean we had "done our time" with my daughter between her being born at 32 weeks due to severe preeclampsia and needing open heart surgery at 6 months old. By 7 months I had slept more nights in hospital beds than I had in my own. I knew I needed to worry about another heart baby but I had no reason to think that the pregnancy would not be successful. Besides her heart and preeclampsia my first pregnancy was perfect. I mean, I'm only 29! I'm healthier than I ever have been in my life! Surely everything would be fine.

I got a blood test the day I got my positive and my first hcg was only 24. I was concerned that it was low but maybe it was just early 🤷‍♀️ maybe I ovulated or implanted late, I wasn't too worried. As long as it doubles right?

Well two days later it was only 34... I was devastated, I cried all night, i could barely function, but then my doctor gave me hope saying it is still rising so there is still a chance. I did tons of research. I learned that as long as it was over a 66% rise in 48 hours it is considered normal. Ok mine wasn't rising that high, only an average of 32% in 48 hours but there HAS to still be a chance right? Did you know that in 15% of pregnancies hcg doesn't double? That MUST be my baby. I already have a heart warrior daughter, this baby must be a fighter too. I prayed so hard that the next time I was tested it would be over 100. I am not even religious but I prayed and wished with everything I had. I would WILL these results into existence.

40 hours later it was 54. Ok not 100 but it's going up faster! That's a 52% increase in 48 hour average! So close to normal... We announced to our immediate family that day. We had my daughter wear a big sister shirt ♥️ no matter what happened we wanted them to know and we only waited until the weekend so we could announce in a special way. We had told them immediately via a phone call when I was pregnant with my daughter and I always felt like I missed out on that special announcement. My numbers weren't great but I had completely convinced myself that it was all going to be fine. That my baby was just a slow starter. I was in full denial that my baby wouldn't make it. That my baby was struggling and dying inside of me. 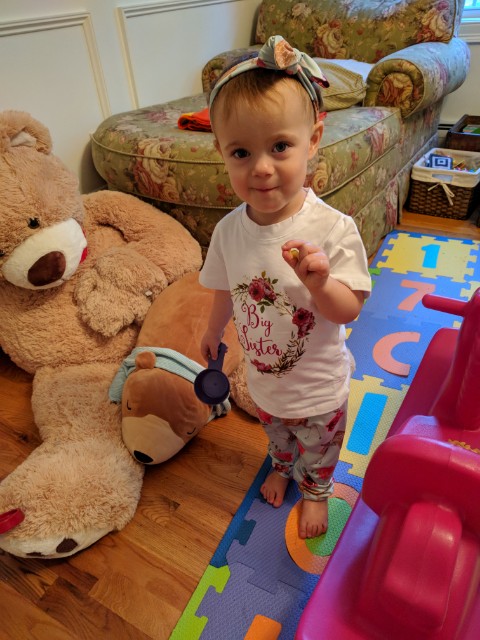 The next night I had a dream that my results came back and it was 130. I woke up so happy KNOWING my blood test was going to be fine. Things WERE going to work out. My baby was fighting! They had to be... 56 💔.... My world came crashing back down with that one little number. Only an 11% rise. I knew it didn't look good but I frantically messaged my doctor praying she would give me good news, that it was possible my baby would make it. That I would one day hold them in my arms. The nurse told me that she "never says never in this line of work" when I asked if she had ever seen a successful pregnancy that started with such a low rise. 💔 She hadn't... I finally realized that it wasn't all going to be ok. My doctor told me it is still going up but to let them know if I had any pain or bleeding and to go back for more blood work in two days. I knew that wasn't a good sign.

Two days later on October 3rd my results came back at 54. Finally started to drop, my baby was gone... I was a little relieved as horrible as that sounds that it was 54 not 58 because I knew that it probably wasn't going to work out at the limbo was wearing on my psyche. At least now we had answers instead of just "wait and see and go back for more blood work in 48 hours". I was having more pain and my doctor was concerned about an ectopic so she sent me to the er for an emergency ultrasound because I'm high risk for ectopic because of the endometriosis. I didn't even make it to the ultrasound before I started bleeding 💔

I was tired of all of it, the ups and downs, the rollercoaster, the hope and despair. I was ready for it to be over. I had finally accepted that I was never going to meet my baby. I would never hold them or rock them to sleep. The only thing we have left now is a tree we planted in our baby's memory. It will flower at the end of May, beginning of June, which would have been my due date.

I bleed for a week and it was incredibly painful, exacerbated by endometriosis pains. One of the most physically and emotionally painful experiences of my life and I have had a number of surgeries and complications. Way worse than my C-section or maybe it's just because I don't have a tiny baby to look after and distract me. My body still doesn't feel the same. I still get random pains and gastrointestinal distress and nausea. I am slowly getting back to where I was but it is taking more time than I expected. I thought when I stopped bleeding that would be the end of it.

My hcg hit zero after a week and we were given the all clear to try again. We are only trying until January because my daughter has an open heart surgery coming up and I don't want a newborn at the same time. It wouldn't be fair to either of them. I honestly don't know what I would do if we don't get pregnant by then because we had done it. We had our baby but it was all ripped away. Some days are still hard and I wish we could wait but if it doesn't happen by January my dream of having children close together would be gone. It would be years before we would try again. They would be 5-6 years apart if we were even able to still get pregnant then.

Hopefully we get our beautiful rainbow soon ♥️🌈♥️