I tried for years to get pregnant and was told for years I was infertile. I became comfortable with the fact that I was not going to have my own children. I decided I would save for adoption. I met a wonderful man several years ago and although I was enjoying being single (after an abusive marriage and rocky engagement) I let him win my heart. I knew it would be just us for a while and I was so happy just enjoying his loving company. A year after we started dating something strange happened, I was pregnant 😱 I couldnt believe it, how could all the doctors be wrong?! Unfortunately it wasnt long before I was brought back to earth when I lost her at 6 weeks. I felt stupid, how could I let my guard down and think that I would actually be blessed with a biological child. I continued my happy life and future goal of adoption.

A year later, almost to the day from our last surprise, we got another shock - I was pregnant again! This just seemed unreal and I wasnt going to allow myself to be tricked again. I knew this wasn't in the cards for me so I cautiously continued forward with all my check ups and sonogram. At our first sonogram they couldn't detect a heartbeat and after running blood work it was determined I had a missed miscarriage. I had my options; let it pass naturally, take medicine to dialate my cervix, or a d&c. I waited and around 10 weeks I finally couldnt do it any longer. I took the medicine and my SO and I went through the most emotionally and physically painful night while my body passed our baby. I had never been so connect to something and I felt like a piece of me had been torn from my body. I was broken. I started drinking heavily and our relationship struggled as we both went our own way trying to deal with the heartache. Eventually we got back to a good place romantically and I calmed my drinking and crying. I had one more day I had to face, our babies due date.

July 3rd hit me like a tidal wave. I couldnt stop mourning and yet I couldn't sit at home with no way of changing the circumstances. I went to my SO restaurant and sat all day at the bar. Slowly the tears would fall every so often without warning. I knew drinking wasnt going to help so I decided retail therapy was my best bet. I walked around our little town's shops and knew once I found "it" I would know. I didnt know what I needed but I had faith I'd find it. I typically am very thrifty, never spending any money on material things unless absolutely necessary. My last stop was an antique store across the street from my SO restaurant. I found it, it was right there! A greek coin elegant dome ring! My little one was a boy - I knew this even if I couldnt have confirmed it. His name was Atlas. I felt like this ring was the most perfect way to carry him with me while still being able to let my heart heal. $270 and I didnt blink. The most money I have ever spent on jewelry and I didnt think twice. I needed to heal, I needed to know it was going to be okay. I wear that ring with pride and it helps me to not have to carry him so closely to my heart because that just hurts so bad. I had begun to heal. 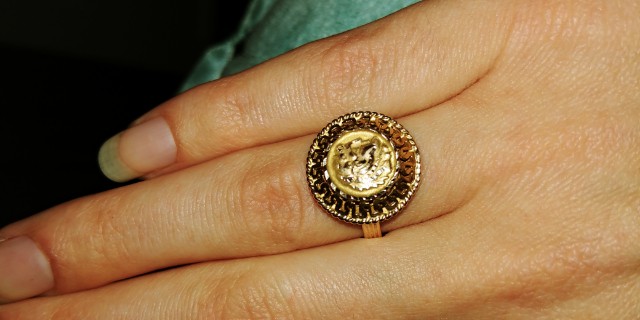 Two weeks later my SO and I went to dinner. I explained to him that I would soon be 35 and I never knew I could get pregnant but now I felt like I had to try! I would be so mad at myself if I left it up to chance to get pregnant again. If I couldnt carry to term then I would fall back on adoption. I just had to try everything I could. His response was the most loved I have ever felt. He said " its not that I dont want to try, its that I dont know if I cant watch you go through another miscarriage again. It hurts so bad to see you in so much pain". I responded " I want a child more then I fear a miscarriage" and that was it we decided to really put in the effort. We went online that night and bought a thermometer and ovulation tests. We started reading about diets and best ways to conceive. We made a plan. About a week later we had our kit and thermometer, we just had to wait for the next cycle as I was expecting my period in about a week. A week went by, life as normal. We went to a friends bbq and had a few drinks per usual. Nothing crazy but oh man was I so sick! I started throwing up at my friends house violently. Felt like food poison but I didnt eat anything that would have been bad, I didnt think. All night I was up sick sick sick! The next morning I had a strange feeling I should test. That's silly i told myself, you havent even started trying yet. My period wasnt due for another 2 days anyways, no way I would get a positive. Until I did 😍 there it was! Just the most beautiful line I've ever seen!

Since this wasnt part of our plan, I didnt really think this would be a sticky bean. That sounds terrible but I had prepared my heart to lose another one. I knew she was a girl from the beginning and I wouldnt - or couldn't - begin to connect with her because I would lose her too. I was cold hearted and wanted nothing to do with baby names or any

talk of babies. How could I want something so bad and be so cruel to the thought of her existence?

My doctor set up an early ultrasound to hopefully put my fears at ease. 6 weeks was early and I expected nothing promising. Then there is was, a heartbeat! Id never seen a heartbeat 😭 I cried and cried. It was the most beautiful thing ever. Like a little butterfly.

For weeks I have been in disbelief. Had it not been for the morning sickness I probably would have believed the whole thing was a cruel joke. Still i was skeptical.

13 weeks we went for the first trimester sonogram. She was a baby! I real life baby! She has toes and arms and wiggles and SHE IS A BABY!!! They said she is perfect and all signs point to a healthy pregnancy.

I have spent so much of my time preparing my heart to lose another child that now I am freaking out because this is REAL!! I never thought id make it this far! I now am trying to switch gears and prepare my heart, mind, and soul for a real life child! Holy holy hell!!! I'm going to be someones Mom! I'm so scared, I understand why it takes so long to get to full term, to give us time to wrap our heads around this process. This is the most terrifying adventure I have ever taken and I cant wait for all the new things yet to come. 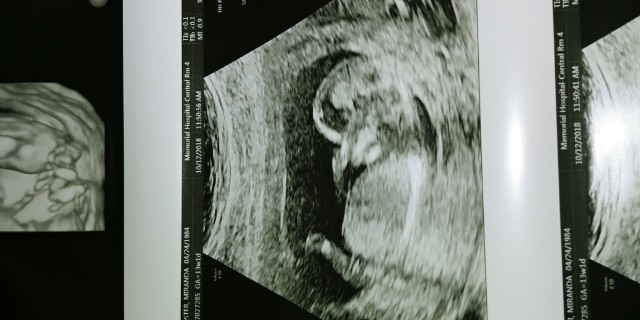 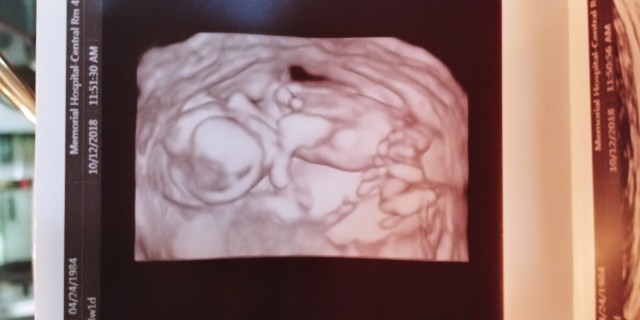