Ladies! I took my daughter to get her pictures taken with Santa and I was expecting it to go on of two ways, either she will love him or hate him. (She hated him) But to be fair he wasn’t really helping the situation at all. When I think of Santa I think of a jolly, kind man..everyone does right?! So that’s what I was expecting..but little did I know the Santa’s that play in movies who hate their job blah blah blah are how some of them are in real life. This Santa didn’t even say hi to my daughter who waved at him before taking pictures. She was off to a good start, I could tell she was nervous so I decided shake his hand to show her he’s a friend and then he rushed me, (THERE WAS NO LINE) and had me sit her down on his lap. She looked so betrayed and then of course had a meltdown. Plus he didn’t even smile in the damn pictures 😑 Anyways I just think he could’ve gone about it with much more of a gentle approach. It was hard to watch but we ended up with the quintessential baby crying with Santa picture. Have any of you experienced anything similar to this? It was just overall a terrible experience for her, poor thing 😭 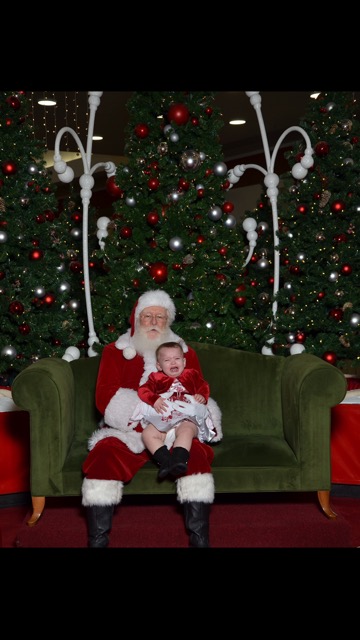