She is suddenly a burst of energy! (she’s constantly doing the fat Amy run! In double time 🤣)

I was getting worried because she wasn’t grabbing her feet or trying to really touch things, etc. I felt like we weren’t making much progress.

Except I can tell the 4th leap is coming to a close because I can finally put her down to play independently again.

Then yesterday morning out of nowhere I roll over to her awake in her bassinet and she basically like “I think I’ll start my day by grabbing all these little piggies!”

Fast forward to the afternoon, she’s grabbing them on the changing table and the floor.

She’s been trying so hard for weeks to roll over from back to stomach, well, she starts rolling in the late afternoon and now she won’t stop (she rolled over in daddy’s lap tonight and tried to roll over on the changing table 🤦🏻‍♀️ -luckily she likes to roll left and that’s towards the wall!).

Fast forward to dinner tonight and she yanks the spoon out of my hand and puts it in her mouth. I think she was subtly telling me carrots are WAY better than peas. 😂 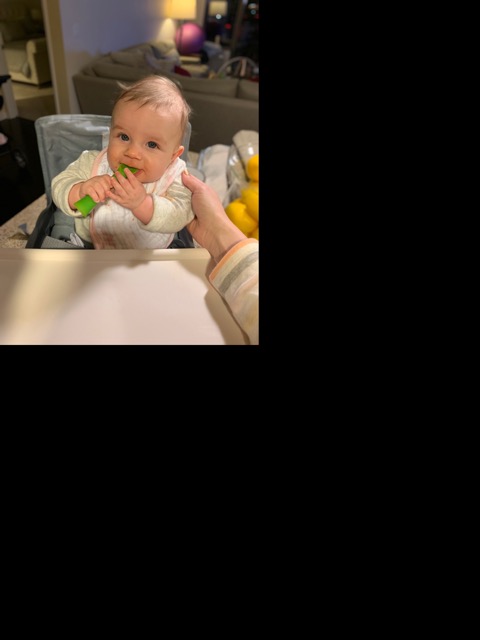 She has also taught me a lesson this week: that I need to stop worrying so much. She will get there in her own time. ❤️

Ps: off topic, but... Anyone else’s LO leaning to one side? I’ve noticed she’s doing it in her activity center as well as when sitting. This is new - before she would just lean forward?! But I’m wondering if it’s from carrying her on one shoulder for so long when she was younger? Can that happen? Make them uneven? Anyone know? We have a Peds appointment on the 11th and I’ll bring it up then, but thought I’d ask if anyone else has noticed this.