It’s been an interesting few days! I fell asleep watching TV on the couch last Saturday night. When I stood up to use the bathroom at 10:45 p.m. I felt a small gush of fluid. I hoped I had just peed myself, but no. Amniotic fluid kept running down my leg and so I knew my bag of waters had ruptured. I packed a hospital bag (DON’T BE ME- pack your bags ladies!!) and waited for my sister to come over to stay with my daughter. Contractions started 30 minutes later and were 5 minutes apart. My husband and I left for the hospital at midnight and were in a triage room by 12:30 a.m. The doctors confirmed I was 4 centimeters dilated, 70 percent effaced, and in active labor. However, an ultrasound showed the baby was in a breech position. So, I needed a c section. (Baby was breech on prior Ultrasounds, so this wasn’t a complete surprise, but I had been doing all sorts of things to try to flip the baby, so I was hopeful) I was in the operating room by 2:24 and Baby was born at 2:56 a.m.! Apgars were 9/9 and she weighed 6 lbs, 3 oz - not bad for a premie!

She was healthy despite being early. No time in the NICU, and baby was ready to go home by day 2!

My recovery was not so easy. My cesarean reportedly went beautifully with no major bleeding or blood loss. However as soon as the spinal wore off, I noticed a burning, knife-like stabbing just left of my incision. The nurses were perplexed because I was on morphine and they could not give me anything for pain for 12 (!) hours. The pain continued on day 2 despite receiving narcotics. While I could get into a position in bed where I had O/10 pain, sitting up always produced significant pain and standing for more than 6-8 minutes made me cry with pain every time. Finally on day 2, we discussed the likelihood that the pain I had was nerve pain. It appears in exceedingly rare cases, the illioinguinal nerve can become entrapped in a suture when the surgeon closes the fascia. Then, anytime that nerve is placed under tension, it becomes angry and causes extreme pain. While I was told the pain should resolve when the sutures dissolve, that could take 3-6 weeks. (😳😩😭)

Yesterday I was taken to the OR and received an illeoinguinal nerve block, which gave me 80% pain reduction (thank God!!). The catch is that the block only lasts about 48 hours. It looks like I will be returning to the hospital frequently over the next few weeks to get these blocks with the hope that this pain will resolve when the suture dissolves and nothing more serious was done.

My sweet girl is making this all seem much less terrible. 😍 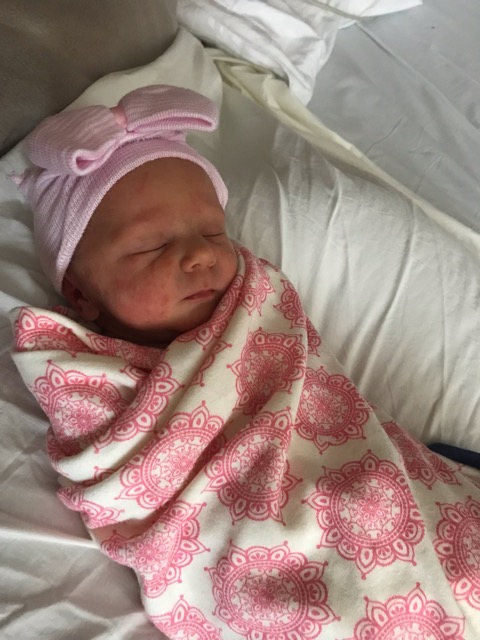