EDIT: HE'S SELLING THE CAR FOR MORE THAN WHAT HE PAID

I'm going to try and not make this all over the place...

So my partner and I had 2 cars. The same car. We absolutely love them both. Unfortunately, things happen and bills all came at once. We were paying what we could but time was running out so my last option was to sell my car. I had already sold my phone.

Anyway, apart from a few marks (the car was an 07 model), it was perfect. Drove great, new tyres, registration. I was devastated that we had to sell it but what can ya do.

So anyway, my original price had a some interest but with no shows and people mucking us around I dropped the price as I urgently needed money.

Someone from Facebook saw my post and lowballed me, offering $2000 lower than what I wanted. He said he was stuck and had no car, only had that amount.

I felt like I needed to help him, and also needed the money. He said I'd have to bring the car to him, and it was a good 2 hour drive with a 10 month old baby.

So, with much hesitation we agreed. We put fuel in 2 cars, put out grumpy, teething baby in the car and drove down to him.

So, in my ad I had stated that the car had a built in DVD player. When we got to the man, he didn't show any interest or ask any questions about the DVD player. His wife took the car for a drive, said they liked it and bought it.

We weren't happy that we went so low on price, but felt relieved that we could pay our bills.

The next day the man asked me for photos of the car because he was "too lazy to take some himself for a friend". I'm a nice person so I just sent the same ones I had posted.

The day after that, I saw that he was trying to sell the car. When we sold it to him he'd said that they just sold a car because it didn't suit them.

I liked his post, I was a bit devastated because I thought we were helping them out and we'd dropped the price so low for them. 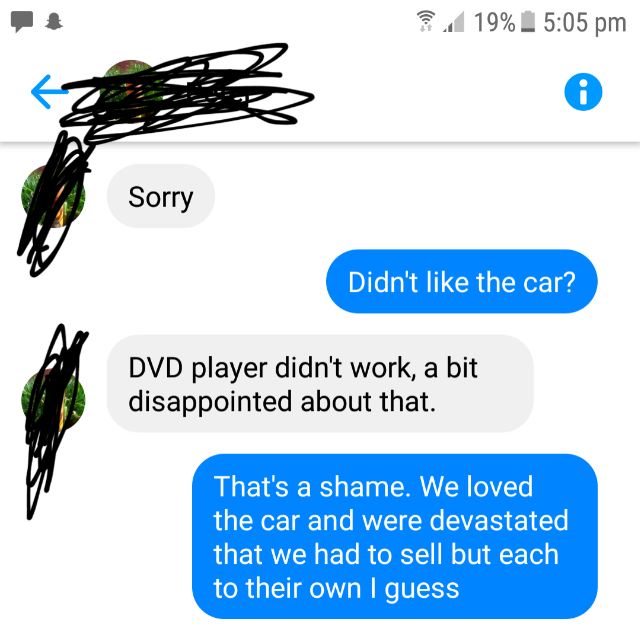 We had never used the DVD player, we'd turned it on once but that's about it. I was confused as to why he was selling because of a DVD player.

So some days passed and then I get another message 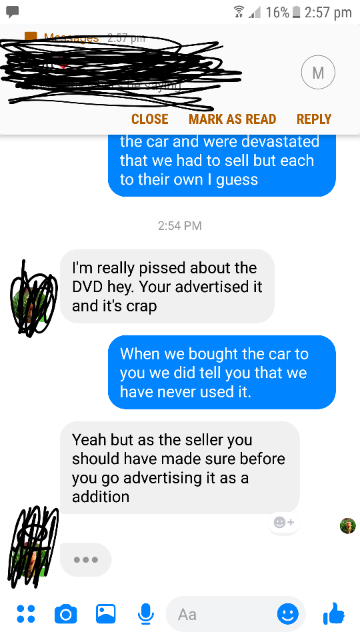 I understand that point about making sure the DVD player worked, but it wasn't on my list of things to make sure worked before selling. 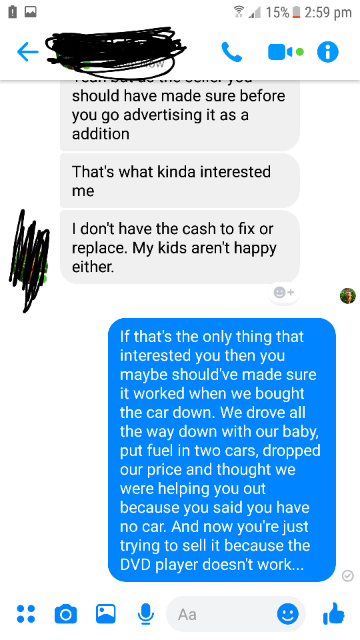 He never once checked to see if the DVD player worked, nor did he mention that that's why he wanted the car. 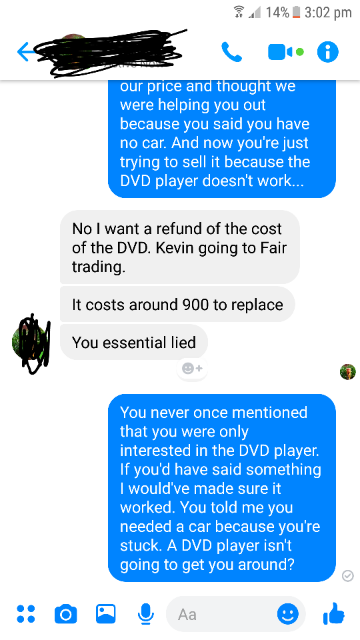 I don't know where he got the idea that it cost $900 to fix the DVD player, but it really doesnt. So he said I lied, which I didn't. I told him the complete truth. 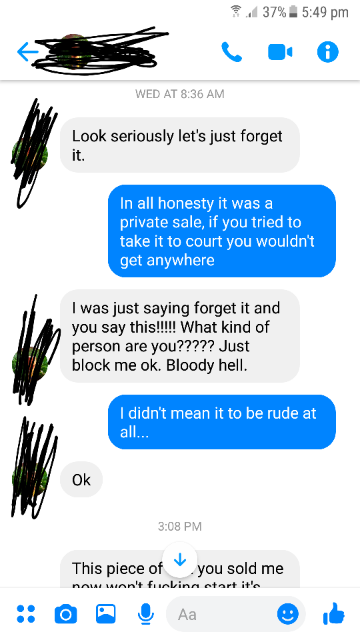 So then he says let's drop it. Obviously realising that he wasn't going to get money from me because I had none to give. I wasn't trying to be rude. I was pissed off that he was threatening me. 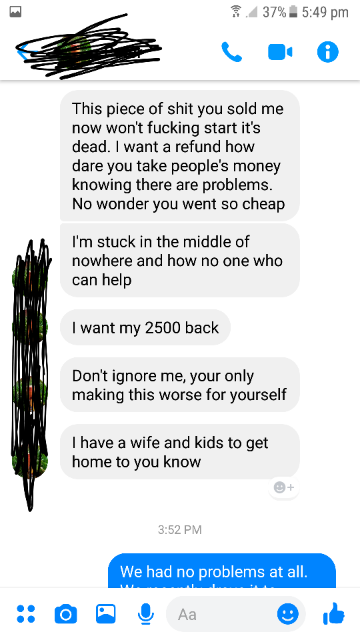 So then a couple days later I get this! And it's got me thinking, he's just trying to get money off me! He tried selling the car days after buying it, maybe didn't get any interest so he tried getting money off me for the DVD player. And then saying that the cars dead. I'd driven 6 hours in the car multiple times to see my family, drove down to him and never once had a problem with the car. 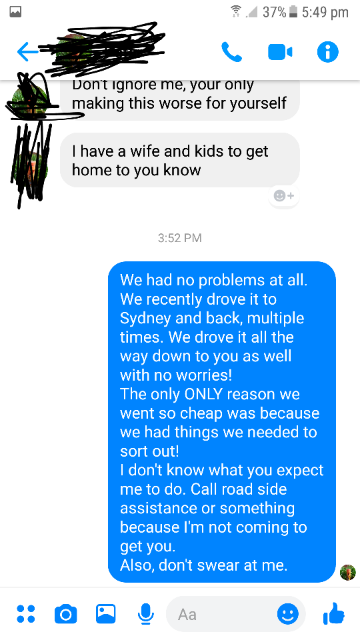 I sent him a nice message back, I was fuming by this point at the messages. I tried best to not be rude and keep my cool.

After that message he has blocked me. I didn't think blocking him was a good idea seeing as he was threatening to take me to court and everything. He'd be able to say I was hiding from him or something.

So, I know this is a long story and I hope I haven't missed anything from it. Do you guys think I should've agreed to give him money? Or was I right in saying what I said?

Just feeling shit about it that's all.