Ok ladies I had my trigger shot 16 days ago (June 6th) and ovulated Saturday. I have not had a period in which my doctor had said if i hadn't fell pregnant I would have gotten my period a week after I put the shot. I have tested but the line pops up really really faint you can barely see it & than after the test is dryed up that's when you can really see the line. I haven't had any spotting what so ever until yesterday but it was after having sex so I think that's what caused it since it was just right after the sex I didn't spot anyone after that. I've had some really light cramping but not really bad & I have also had sharp stabbing pains in both my back & stomach on & off. I told my hubby to get me some tests when he's off work so I can test again & if I don't get a period by next week or get a positive test than I will give my doctor a call. I know the trigger shot hcg has completely gona away since I had taken a digital test wednesday and it had came nack negative. It's my first time using a trigger shot so I'm not really sure what to expect. Help!! 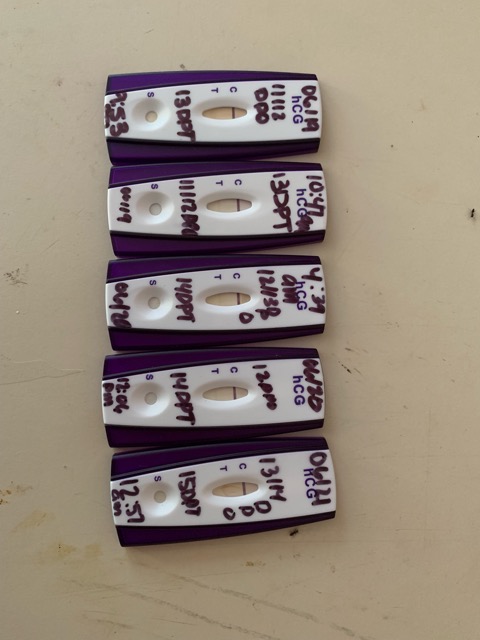 These are my tests as I said the lines showed after he test dried up but before they had really really faint lines but you could barely see them. I'm getting first response today when hubby is off work.