He Doesn’t Want A Relationship. Says I Can Disappear If I Wanted.

Okay. So, I’ve been hanging out, having sex frequently, seeing, and dating this guy for about 9 months now. We established each other as friends then eventually FWBs and most recently starting a relationship. However, now, he says we should cool it on the relationship stuff when he was the one and is always the one who brings it up. I never, ever do!

But before, two weeks ago I might add, he was telling me how much he wants us to be together, he met my family, telling my mom how special I am to him and how he’s on board. Now yesterday, the script was flipped. And I’ve never pressured him into anything. He does this a lot. Talk about relationships, bring up how I’m the best thing in his life and he’s telling me now that he doesn’t want to move forward and that if I wanted to, I could disappear. No, really.

We have an upcoming trip in two weeks and my birthday is next week. He supposed to be coming with me on the trip cause we bought our plane fare together. Now I don’t know what to do. 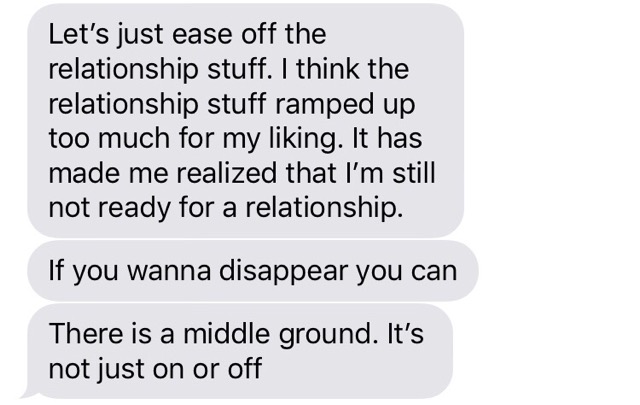