I JUST had a breakdown with my husband about how I feel like us both working full time is having an affect on our family. We just had a baby 3 months ago & we also have a 2 year old. Our children go to a sitters house while we’re at work. I generally have the kids home with me all day on my days off about 3 days a week, but out of those 3 days we’re lucky if he’s home with us 3 once a week.

I was talking to him about possibly cutting our hours back for a week or two so we could spend more time together as a family, that the kids & I missed him, that I didn’t feel like we were giving each other the proper attention (it had been a couple weeks since we had sex last).

We’ve been pretty cranky with each other as of late just because we’re tired, which is another reason I wanted to discuss taking some time off. I was bawling because I just felt like we were drifting apart. He insisted he wasn’t going anywhere, that life is just busy right now & he agrees we should take some time off to spend some much needed quality time with the kids.

That discussion took place 2 days ago. On top of us barely seeing each other, I had noticed when we were home together he ALWAYS had his phone with him. Like he never set it down & if I grabbed it to look at the time (which normally wasn’t a big deal) he would tell me to ask before looking... so when he left his phone in the car to stop into his work to grab something he forgot, I looked through it & found this: 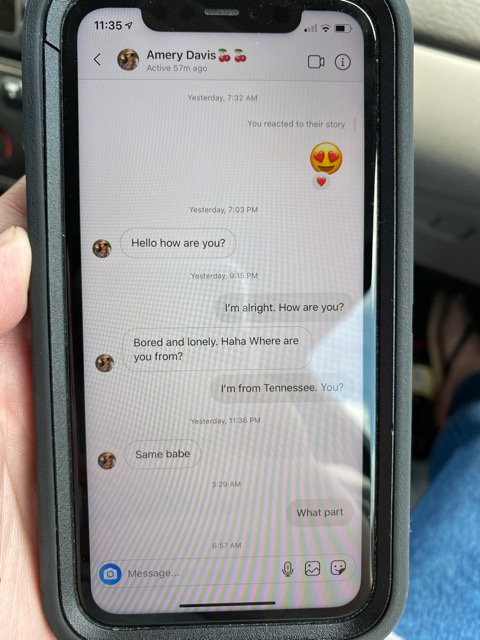 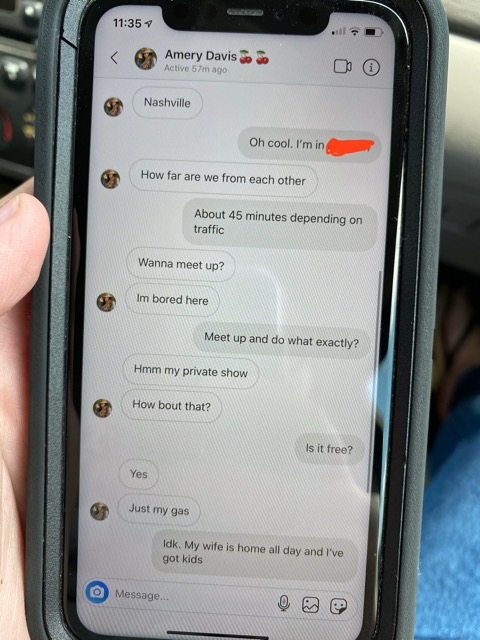 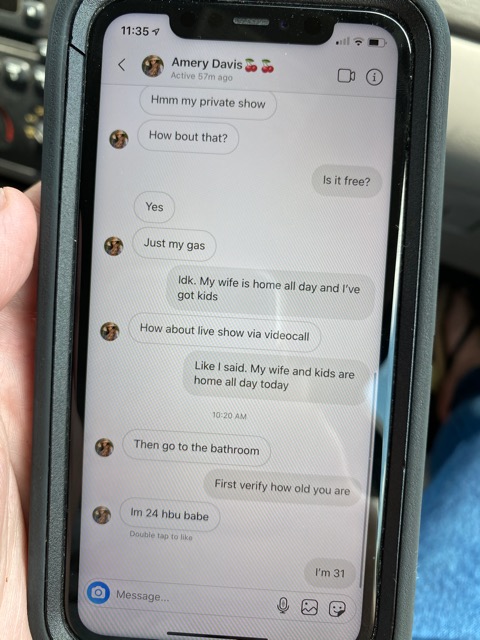 I mean, I know he didn’t do anything BUT if I wasn’t home all day would he have done it? Would he at least have video chatted with her? THAT’S what I don’t like; the “what if”.

I’m more pissed off at the fact that I was just bawling my eyes out about me feeling like we’re drifting apart & he told me not to worry about anything 2 days ago.

I’m so mad. Guess it’s my fault for snooping but. Fuck.

I confronted him about it. He basically just yelled at me for going through his phone. He deleted his Instagram, said nothing happened & won’t happen. I told him it was funny how that happened two days after I told him how I felt & he said he wasn’t even the one who lead the conversation in that direction. I said “you may not have lead it there but you were entertaining that side of it”. I told him I didn’t appreciate him talking to women like that, sending heart eyes & asked him if I wasn’t home if he actually would’ve hung out with her. He said “of course not. I only want you.”

I guess she took her Instagram down or changed her username. I can’t find it now. But good riddance. 🤷🏻‍♀️ I’m all for body positivity & making some cash, but there’s a way to do it without being a home wrecking bitch.

I guess my next step is to find out where my children & I will be staying until he can learn to respect me & our marriage.

Thanks to everyone who commented.

The house, the bills, everything is in my husbands name that’s why I left with the kids. The only thing have to prove I live there besides my stuff is the internet bill that’s in my name (which I’ve turned off to be petty). The children & I are at my sisters house 45 minutes away. I literally just packed some stuff for us & left while he was at work.

Of course I don’t want my marriage to end, I don’t think anyone goes into a marriage thinking they’re just going to get divorced 4 years later... but I don’t deserve to be disrespected like that & my children don’t deserve to grow up in such a negative environment.

Are we going to work on things? I don’t know. To be completely honest I’m really torn right now. I don’t want to be the idiot that stays & has this happen over & over again... but marriage is a life long commitment to me; once you’re in that’s it.

I think some time apart will do a lot of good. Perhaps it’ll knock some sense into him, my kids get to spend lots of time with their cousins, my sister & I get to spend time together, we get space of figure out what the next step in (what’s left of-)our relationship is.

This shit is hard.

Also, I had three different people look - the girls Instagram was either deleted or she changed her username.

One thing I do know for sure is that I’m grateful for the overwhelming support in the comments. Thank you all so much.