Alright, so I work at a fast food place and I'm a General Manager in training. I have this team member that we hired about a little over a month who I'll just call "N". Everyone loves this guy, even I did. He was funny, friendly, got along great with everyone at our job. We even decided that he was going to start training for a management position. I'm sorry for rambling but I'm just so confused about why he would fucking do this. I don't understand.

My family also works with us and invited him over to go swimming and drinking with us after he gets off from his other job. We were already drinking when they invited him, and I know it goes against the whole fraternization policy but I know everyone at my job will drink with eachother every once in a while. Managers and team members.

Anyways, after we went swimming we all went back to my family's apartment to drink more and play games. We drank, he made some shots to drink. Then he started talking about how he does porn for money and I tried to change the topic to his baby instead. He shows us pictures, but then shows us a picture of his dick. I felt like it was time for him to go so, me being the mom of the group decided that I would take him to his truck. I feel so stupid doing that but I just didn't feel comfortable with him staying the night.

That's when everything gets dark, it happened so fast but so slow at the same time and I don't know why. He kept grabbing me everywhere he could and started trying to make out with me and I just kept saying "We gotta stop. I know you're a good person. I wanna go home. I wanna go home." But he kept grabbing my arm to fucking grab his dick. I pushed him away and said I'm going home. He grabbed my arm again and said he was taking me back home. I have to go across the pool area to go home.

I tried to get away from him faster and said "I have a boyfriend of 6 years and i love him. Stop. I wanna go home." But then he pulled me onto one of the long pool chairs and that's when it felt like my whole body was shutting down. I kept trying to close my eyes for some reason. He pulled down his pants and tried to shove his dick in my mouth and tried to take off my clothes. I guess fight or flight mode finally hit cuz I jumped up and said, "Wheres my boyfriend? I need my boyfriend" and I booked it. I know it felt like hours to get home. I can't even remember running home. I remember running inside and just kept repeating that "I wanna go home". My family helped me and apparently "N" was right behind me so they dealt with him.

He called 3 times that morning and texted me after. 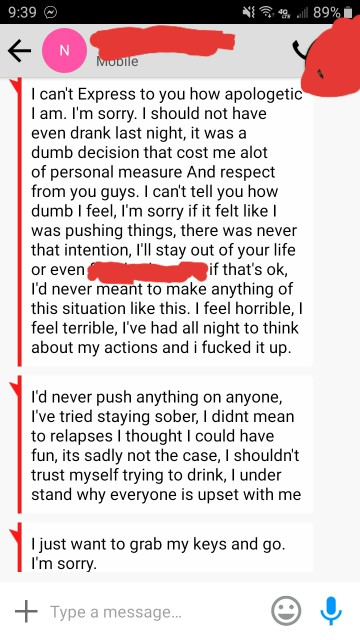 I'm sorry that this is so long. But I need to get it out, I don't understand why he would do this to me and I don't know why I even feel guilty about everything. I feel like I should have tried harder to get home. All day I've been dizzy, my stomach hurts, it's not like a regular hangover. I tried to eat but I just couldn't hold it down. I keep hearing his fucking voice whispering, "Let's keep this a secret" and I just don't want to keep remembering.

He didnt show up for work, thank god. So I had to tell my boss that he quit. She asked why, and I told her. My family told me to tell her and she acts like my friend and mother figure. So I thought it would be okay. She says, "Well, I dont know if I have to call HR and fire you now." She's not going to fire me, but she says I cant tell anything to anyone and that I cannot call the police. And that if anyone asks, he quit. She says its because he could sue me and my work for fraternization between a manager and team member.

I've been fucking depressed all day and can barely wrap my head around the situation.

Thank you for letting me talk about this, I'm sorry that it's so long.