I am 33 weeks and 5 days, and I had a pretty big scare the other night. My neighbor in the apartment next to me is my sister in law. She's not so great of a chick, unfortunately, but the problem was, my two brothers started fighting with each other and we could hear them through the walls. Shortly after we noticed the things being thrown around, one of the girls staying over there came in and asked us to come help stop it.

With MY brothers, I knew that they would kill each other. I ran over there and tried to diffuse the situation. I was more concerned with the three young children who were in the living room as well, and their mother was gone so I had no clue what to do but try and stop it.

I got shoved a little bit, but nothing serious. After the cops showed and the situation was seemingly over, I went home. That is when everything got worse for me.

I have really bad anxiety issues and after trying to stop that whole situation, my heart rate skyrocketed and I had a horrible panic attack. I tried to calm down, my fiance was trying to console me, but it just wasn't working. Not at all. I can't explain it.

A few minutes of crying let to me walking down the hallway to head to my bed, but when I passed the threshold into the bedroom I felt this SHARP pain I had never felt before across my upper abdomen and shortly after that a heavy pressure and pain on my lower back and spine. It was so heavy that I actually fell over.

I accredited the stomach pain to the anxiety and vomiting to that as well but the back pain was so severe that I was scared. Nicholas, my fiance, called the ambulance and I had to go to the hospital shortly after.

At the hospital they found out after taking my vitals, blood, and urine that I was severely dehydrated (despite drinking 6 glasses a day) and have a UTI. The doctor said it could send me into preterm labor if I didn't take care of it. 😯

I was really nervous and sad that whole night. I just can't fathom stressing myself out so bad that it could hurt her. Luckily her heart rate was 174 and she was moving fine. I was scared though, even after the pain stopped, because the Braxton Hicks contractions I'd already been feeling this week got so much stronger.

I guess I'll just lock myself away and refuse to stress myself out or be around stressful people for the next 6 weeks! 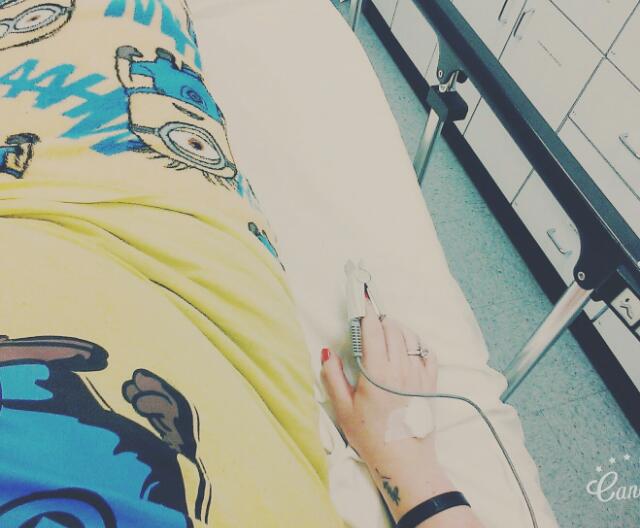