I bled on my boyfriends jeans😭😱

Periods aren’t really talked about much where I’m from. People just keep it to themselves unless you’re a girl and a girl and you’re askin for a tampon. So I was iffy about going into the details about “spotting” and having to explain to him what that meant. So anyways I was spotting and it wasn’t that bad, he was laying on my bed (belly down) and I jumped up on his back and laid down on top of him. SMART MOVE. turns out haylee isn’t spotting anymore and that light tampon I had in has 0 purpose anymore. It was like a crime scene😂 I immediately threw him a pair of his sweats he had over at my house and I told him to give me his pants. Also let me just say that his friends were over here too and are the ones who pointed out he had “chocolate” on his ass! It was so hilarious but also pretty traumatic at the time. Thankfully I got all the blood out of his jeans me my underwear I was wearing. Ladies if you accidentally bleed on someone, it’s okay it happens. I was so scared but then he reassured me (his friends did too) that it wasn’t gross and it’s just a human thing. And if you still don’t feel any better about the fact you bled on someone just don’t do what I did and lock yourself in the bathroom for an hour. (Peep his jeans hanging in the background) 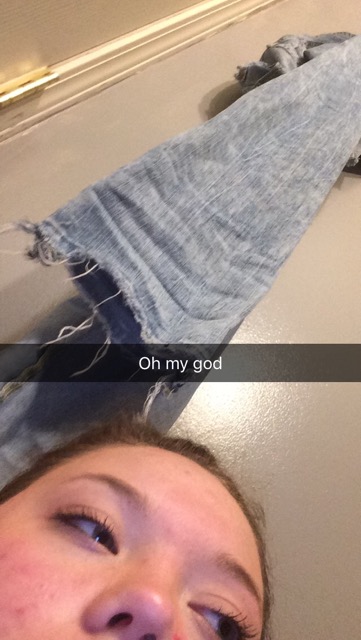