Help! How should I break up with him?

This is my first post on Glow and unfortunately it's not the happiest :/ but I need some advice on the matter.

So I've been dating this guy for 6 months. During that time, we had some ups and downs but I really really liked him. I opened up to him more so than I do with other guys. However, I noticed he became somewhat nitpicky with certain things about me and became a little distant. I knew something was wrong and only until yesterday did I know for sure. He was very quiet and barely spoke to me throughout most of the time we were hanging out together. Another warning sign was when he abruptly left me on the subway after saying he was going to spend the night.

So this morning I text him and asked if everything was okay because I noticed he was distant. 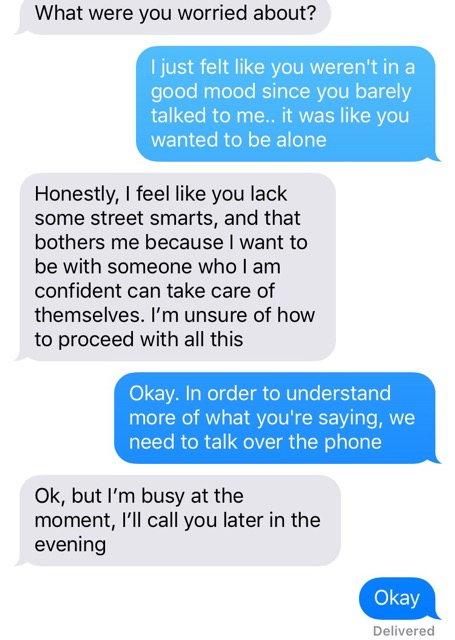 My first reaction was like WTH do you mean by street smart because that's vague and can mean different things.

Anyways, we just spoke on the phone and he mentioned a few things which did not make sense. He remarked how when we met, he thought I would be skinnier (we met online) but liked my personality anyways. Mind you, he also posted a picture that he took a while ago and looked much skinnier. He also said I'm immature even though I'm a 24 year old who moved to the city with no financial help, works full-time as a teacher, and attends grad school. At the end of the phone convo, he said it was up to me to decide if I want to continue things. And if we were to continue, he would hold me to a higher standard and I would have to change more things about myself.

I know the right thing to do here is to end things. I want to be with someone who I feel comfortable with and not feel pressured to be someone else. I'm just really sad because I felt like this came out of nowhere and I was really invested in this relationship. Now I just feel like I was belittled..

He told me to let him by the end of tomorrow. I don't know whether to call him or text him. I never broke up with anyone before. And despite all the bad things he said to me, he was a decent boyfriend. Also, another thing that sucks here is that I bought him a nice wallet from Coach for Christmas.. I had it personalized with his initials. However, I can't return it since its been personalized and that's Coach's policy.

Should I still give him the gift or hold on to it? Thoughts? I would really appreciate it :/