My boyfriend of almost a year and I have recently had a pretty rocky relationship. But we’re working on smoothing things out and our communication is slowly getting better. He has a history of being emotionally abusive towards me and I’m learning how to deal with him in different ways (easing on my temper when it’s completely irrational, etc.)

We’ve been TTC for a few months now. I also have a history of alcoholism and I’ve finally quit cold turkey, I’ve been sober for almost a month now. 🙌 he knows that it’s still hard for me to be around alcohol, and my self esteem levels are shot to begin with, so no drinking around other people who are drinking is really rough. I’ve tried to explain this to him but he thinks I’m being selfish and has no intentions of quitting or at least slowing down. We went out the other day after a volunteer project for lunch with everyone the other day and he had about 7 drinks and a shot right in front of me with everyone else. It’s really awkward and kind of humiliating, because he isn’t backing me up and I’m just left to explain why I’m the one weirdo not drinking. It’s uncomfortable and a situation I’ve never really been put into before. Ive been trying so hard for just solo days together with no alcohol, but all he seems to want to do is activities that involve drinking. I wouldn’t mind so much because I really don’t want to be a buzz kill, but I mostly hate how incredibly mean he gets when he’s intoxicated.

Anyway, the other night he randomly called from the bedroom if I wanted to go to a lacrosse game. This was around 4 pm. I awkwardly said, “um.. yeah maybe?” And that was that. I was a little bummed because we had plans to do something together that night, (I’ve been dying to go see the Denver zoo lights like a nerd) and I didn’t want to be around alcohol. Normally I would’ve brought it up, but I was tired and mentally drained from him going off on me all day previously for I don’t even know what. This man is allergic to any kind of apology, where I am the absolute opposite. Well I kind of forgot about it, and around 6:45 (apparently 20 minutes before we were supposed to leave) he came into the living room all dressed and ready and said “okay you ready?” I said “I think I’m just going to let you go to that.” I know I could’ve handled it differently but it caught me off guard. He just proceeded to say “oh well that sucks” as he continued getting his things together. 15 seconds later he walked into the living room and grabbed his phone and said “well now I need to text jordon so he can see if he can give your ticket to someone else.”

That 1. Made me feel bad, 2. Made me feel like he didn’t care how I felt or that I didn’t want to go, and 3. I never even knew who was going. Jordon happens to be a guy I dated briefly before my now boyfriend, which would’ve made it even more awkward for me. He continued to just grab his things and before he walked out kissed my forehead and said “okay well I won’t be home until around 9:30.” And left. He came home around 11, of course. Drunk. Turned on the living room lights, went into the bathroom and started cussing loudly about I don’t know what. Came in and sat on the couch and immediately started attacking me. Saying he doesn’t know why were in a relationship if I never want to go out with him, how this will never work, mocking me using a child’s voice, calling me every name in the book, cussing beyond control. All the while I sit there and take it and just calmly ask him to please stop. This goes on for another 7-10 minutes so I finally get up and say “okay, I’m not going to be spoken to like this tonight” and go into the bedroom. He came to bed around 2 am. I woke up the following morning (Christmas <a href="https://play.google.com/store/apps/details?id=com.glow.android.eve">Eve</a>) and as usual pretended nothing happened. He called from the bedroom saying “hey I’m kind of hungry, will you make me a breakfast sandwich.” I wanted to go punch him in the throat, but I took a deep breath and went upstairs and made him one.

He settled down and I appreciated the calmness so I also pretended nothing happened and I never brought up the game. We had a decent day and yesterday (Christmas) was also decent. Today I saw this picture on his Facebook that he was tagged in. 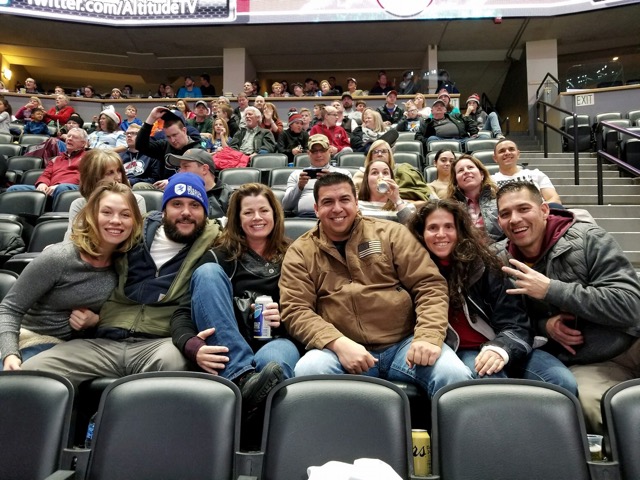 He’s in the blue beanie. I don’t know anyone except my ex in the tan jacket. The picture made me a little uncomfortable, I’m not entirely sure why. I guess I felt like her hand was on his knee, but that could just be the angle? I don’t know, she was just very close. I might not have minded so much if he hadn’t treated me the way that he had.

I just want to know if I’m overreacting. I’m not sure how else to handle this, and I know that if I ask him about it, he’ll immediately turn it around on me.