Please give me the encouragement I need to stop crying over this asshole who calls me ugly, fat, tells me to kill myself then when I say im done tries apologizing and says he doesn’t mean it. I need the strength to leave for good. I always give in.. I always go back because I love him. But he treats me horribly 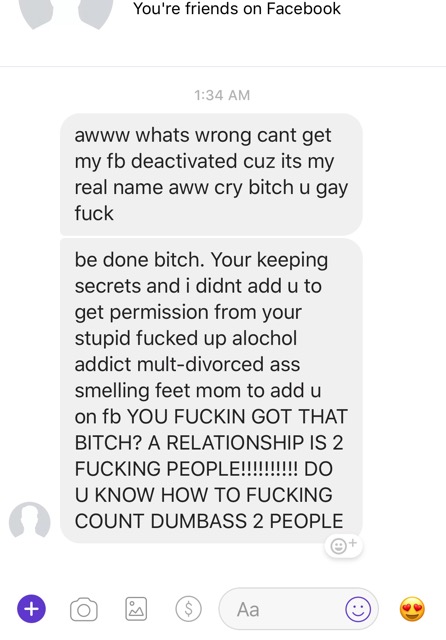 Edit: this all started because I have two fb’s. One for friends and one for family because my family and him don’t get along at all. So to limit drama I have two. He knows this but still throws himself a tantrum and threatens me because of a Facebook account that he has access to just isn’t added on. There’s more to the conversation from him because I was leaving him on read with him telling me to block myself and calling me names etc.

Update: his identical twin who lives out of state and who he recently started talking to after a year of not speaking sent me a fb message. He said he didn’t want to come between our issues but told me his brother would get along with people if he controlled his anger and that no one is going to put up with it. (He’s threatened me, he’s threatened his brother, his brothers gf now ex, and several others). My boyfriend well ex has since blocked me and his brother. 4 days ago I changed my number, deactivated my emails and blocked him. He created a new account and sent a very long message saying to make a list of things i want different and what I expect. It went well for a day. Just one day. I refuse to do this again. Happy to say I’m done with the abuse.