i've been on this app since i first got pregnant last year and wanted to share my journey since all the ladies on this app have been SO helpful and supportive through EVERYTHING. i seriously cant imagine how i could've gotten through everything without you all.

so my hubby and i tried for 10 months (just having sex regularly) with each period being a huge stab in the heart until we finally got pregnant. a month after finding out we were pregnant, we found out his mom passed away and because of political reasons, they were not able to see each other one last time. a month after she passed away, i had a miscarriage. that was april 1 of last year, the worst day of my life where i wanted to kill myself and go with my baby. the baby came out naturally and i didn't know how to heal. i only had one week off work and going back was like being in a trance. even now as i write about it, the emotions are just as strong.

we tried to remind ourself that death is something everyone has to go through and that the timing of death is uncontrollable. some die early, some die young, but life moves on.

after that, we started more conscious trying. preseed didn't work at all, but using ovulation kits and monitoring my bbt helped and within 2 or 3 months (can't remember) i was pregnant again. there wasn't really joy but a sense of numbness and fear of letting myself feel... which is quite natural i suppose. each day went by and i was ready for something to happen again. then weeks went by and somehow i got through the first trimester (where i lost weight from nausea). second trimester didn't make me feel relief cuz i knew miscarriages can still happen at that point. third trimester came around and i was still worried cuz i knew about stillbirths. i got diagnosed with gestational diabetes but didnt care at all cuz all i wanted was a healthy baby. i was willing.

at 20 weeks, even though my baby measured big, they were worried he'd be small because he had a single umbilical artery but he ended up staying big my whole pregnancy to the point where doctor was worried about him being too big for me. im 5'3 and pre pregnancy i was 110 and my hips are like the size of my waist so i didn't think a natural birth (as much as i wanted it) would be possible for me.

somewhere in between, i had a scare - bright red blood. i thought okay my life is over for sure how can i get over another loss.. but thankGOD it was just an irritated cervical polyp.

anyhow so come 38 weeks and i have a regular checkup. doctor was like btw do you want me to a cervical check? and since i read about everyone's here, i said yes! she said i was 100% thinned and 1cm dilated, which was surprising since i had NO braxton hicks/contractions that i knew of. anyhow, since i was getting close to 40 and despite me being super diet controlled (for GD), baby was big, we decided to do a membrane sweep at 39 weeks.

a few days after that, i had my bloody show twice, but ladies on this app were like that doesn't mean anything so i didn't have any expectations. and after that, i lost my mucus plug again but since i already lost it once at 34 weeks, i thought nothing of it. in my head, i was going to have to be induced.

alas it was one day before 39 weeks (the day id get my membrane sweep). it was also the last day of work for me. so after i finished work, i decided to go grocery shopping and try some last minute stuff (spicy salsa, pineapple, etc.). and instead of getting a cart, i was like i should get a basket and strain myself! well, while shopping i felt two small gushes but didn't think much of it. when i got home, i saw it was pink liquid that came out so called the hospital. they were like we're not sure but come in just in case and be prepared to stay. so hubby was off work luckily and we headed in and shockingly, it was my water! i was like good timing baby!!! now i dont have to get my membrane sweep or worry about getting too close to 40 weeks and u came after i finished my last day of work!!

so i was still fine for hours (just light cramping) which is why they decided to administer 1/4 a cervadil pill since my water was already broken. that sped up contractions for sure but when i was checked, i was only 3cm. at some point, i started asking for gas. i DID NOT want an epidural and remember learning nitrous would be a first option for pain relief. that took forever to get to me.

also, during labor, my babys heart rate fell to 50 twice which was SUPER scary. in my head i was like ok emergency c section but i dont care anymore because i just want baby to be ok--cut me open whatever! thats when anesthesiologist came in to talk to me about epidural which i did not want but he said if they do emergency c section, i'd get knocked out completely so epidural is better and maybe they could just do an epidural site but not inject anything. so hubby and i decided ok but anesthesiologist came back and was like oops sorry i misspoke apparently we can't do a site because my supervisor said that has a lot of potential dangers. part of me was relieved but i was also like how did u not know that??? so as a result of babys heart rate and the baby monitor not working well, doctor asked if she could break my water to attach monitor to babys head (which i also learned about in birthing class) to better monitor baby. i said absolutely since i just wanted baby to be fine and my water was already broken anyway. that definitely sped up the contractions and soon i could feel my body pushing. they told me not to push as i wasnt at 10 yet (and i knew the dangers of pushing too soon) but i kept saying again and again that i CANNOT control the pushes. CANNOTTTTT. during that whole time, i was watching my contractions and administering my nitrous and in between using the oxygen mask. the nurse asked me if the nitrous was helping and i was like "nope" and she said that it's more of a mental thing.. at one point they came to check again since i was like i really cannot control, and doc was like ok u can push. she asked me if i wanted to change positions and i said yea i wanted to squat but immediately into that position, babys heart rate dropped again (i think its cuz i have anterior placenta and leaning forward pushed into placenta more) so doc pushed me onto my back, put my feet in stirrups (worst birthing position) and thankfully again babys heart rate went back to normal and they guided me in my breathing and pushing which i did. i could feel babys head just staying there at my vagina and i was like can u guys just pull him out haha but doc was like NO! she asked if i wanted to touch babys head i was like NO! omg i did not want to know how stretched my vagina was. i watched as they poured some liquid there probably to help the perineum. at one point another male doctor stuck his fingers in my butthole and i was like OWWWWWWWW and thinking back it was probably to push babys head up since i was in that horrible position. next thing you know, i see a crying baby flying towards me and oh the relief and emotions came pouring in. a third doc came to me and was like "you had this big of a tear" and i wanted to slap him cuz i did NOT want to know. i didnt care about anything. all i knew was that babys here. labor ultimately was about 9 hrs, much faster than i had anticipated.

so information i learned from birthing class was helpful in making decisions and knowing my options but ultimately, we didn't play any music or mantras, i was laying on my left side the WHOLE time during labor with a pillow pushed against my vagina without switching positions, i never got in the shower, yoga balls were NOT helpful.

my baby was born feb 28th 459am weighing 8lb 8oz and measuring 21 inches. it's been six weeks now and despite the pp pain and other pp related difficulties, nothing matters when i look at his sweet little face. 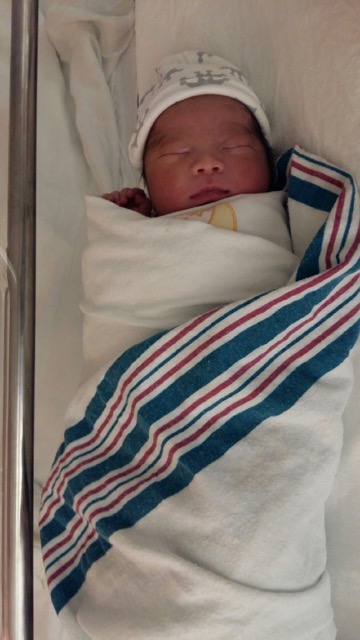