The story of the most crazy yet interesting and intense relationships i’v ever been in at the age of 18. We met in college, and the relationship began as he initially approached me. He would do this for the next 3 days, talking to me for at least 30 minutes, telling me how pretty and gorgeous i was. Telling me i should model, and everything else. He was VERY blunt and told me he thinks about sleeping with me. He kept to himself and he had the kind of attitude that i was attracted to in a guy. We would continue to talk for the next few weeks. We would have sex and talk about the world. We would often walk outside at 2 am when we couldn’t sleep, look up at the stars, and he would tell me how he felt like he met me in a past life, and how he could stare into my eyes all night. At night i would put on my favorite playlist and he would cuddle me all night until we fell asleep. Now this was my first “relationship” ever so i didn’t know the signs of a bad relationship. Things started to get bad very soon. He soon showed signs that he was a schizophrenic.

(Im keeping this short and summarized)

Things soon changed. He would tell me about his terrible family life, how his parents don’t love him, and other issues as we would sit in a car at 3 am for hours as i would talk them out and “council” him. One day, he cried for the first time in front of me and told me that no one had ever loved and cared about him as much as i have and he thanked me. Moving forward, i noticed that he was constantly wanting to have sex. Even when i said no, he kept budging and budging. I seriously thought he had a sex addiction and so did he once i talked to him about it. He cried again, and told me he would never touch me without my permission and stop pressuring me.

Fast forward he became distant. Distant to the point where i would look into his eyes, and it seemed like it was someone else looking back at me. He didn’t seem himself.

His responses to certain situations were far from normal. He would often freeze into place, which i later researched was a symptom of schizophrenia. He then began to lack empathy, and often said the most delusional things. Such as “I’m going to be the richest man in the world” “me and you are going to own this business together” and “everyone is dumb except for me.” I knew this was normal, but being the person that i am i gave him the benefit of the doubt. I knew he had no one else in his life, and so i wanted to be that one person that would be there for him.

He asked me 3 times to be his girlfriend, and i denied each of them, until i finally said “okay yes.” And looking back, it wasn’t sincere. However, I am very loyal. Fast forward i told him to stop talking to me because i found out he sexually harassed this other girl at the school. When i asked him he said things like “who cares” “i didn’t cheat” “yes i cheated I’m sorry” and then would switch between the two as the tone in his voice changed. It was very weird, and i was very hurt. He would walk away when i told him i really needed him. After cutting him off, the next day he sobbed with his head in my shoulder, begging me “please help me” “im so sorry” “theres something wrong with me.” Hugging me so tight as if he were holding on to his last bit of sanity. I then wrote this in my notes. 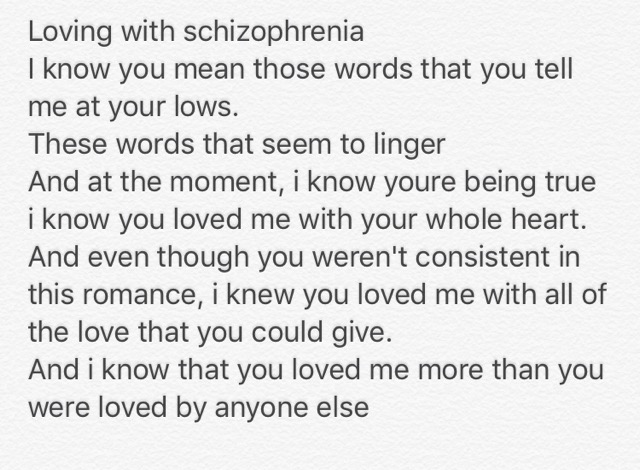 I felt extremely bad for him and how delusional he was. And would cry at night knowing that he goes through things like this every day and that no one cares about him. I am naturally very empathetic and would always fix what i was doing to match his needs. Towards the end of the 4 months we were talking it seemed worse. He also smoked weed which i think made matters worse and i think he did other drugs behind my back. He would say “everyone keeps talking shit” or “did you hear them. They were just talking about you” or “i kept hearing people on the second floor.” It scared me, and i continues to look up what it might be. He had many friends, but soon lost all of them and ended up with no friends. They even asked me “what happened to him.” I remember when i would cry at some things he did if he was annoyed with me, his face and mood would automatically change and he would come to comfort me. He later also became disrespectful calling me a bitch and other things, just to apologize, and then take back the apology. It was a very complicated relationship.

I left a lot out and i could probably write a whole book about our 4 month relationship, but as for this post, i want and kinda need to keep it short. I learned so so much in this relationship, and it has taught me so much about the world. Every day was so frustrating, and i had always remained calm and generous. I later found out he had been sleeping with multiple girls the entire time we were talking, even though he would always tell me he was loyal to me and would never sleep with anyone else.It was hard to go through and recover from, but it was worth it, as it has taught me a whole lot. I loved someone more than i loved myself, and that was my mistake. Even though i wanted to help, love, and care for him, it wasn’t my job, as i was hurting myself in the process. I didn’t feel like myself in this relationship at all. The story continues past this and i left A LOT out, but this is the jist of what happened. And it was very interesting to go through. Thank you for reading my story!

🔷For those that would like to help, i just wanted to say thank you, it is very much appreciated. However, i decided to cut off contact with this guy, so i will no longer be communicating with him. I actually have a no contact order (for other reasons i didn’t mention)

🔸mental illness is very real, and sometimes easy misinterpret. Schizophrenia is often judged for something completely different from what it actually is, when all schizophrenics really need is love and support. He was a victim of an illness beyond his control, and i still wish him the best.