My boyfriend and I have been amazing lately. Like literally so great, I’ve never been happier.

In January we had a very big falling out which caused us to almost lose eachother. Thankfully we overcame that. We have been together one year.

Today he was supposed to come to my parents with me for my little brothers 21st birthday but this morning he messaged me asking “on a scale of 1-10 how annoyed would you be if I didn’t come tonight?” To which I said why? And he said because he wants to do some work to his flat (he currently lives with his mum and brother while he renovates his flat)... I told him I get that he wants to do his flat and I do support and help him but I would be pretty annoyed as my brothers 21st is important to me and it’s been planned for a while, and as he is playing golf tomorrow night but isn’t cancelling that. He didn’t reply so I asked him what he was doing and then eventually messaged me at 3pm when he said he didn’t know what he was doing. I asked him to let me know as my family need to know how much food to make etc.

After this he ignored me. Now I will say I never get bothered by him not replying to my texts right away or anything like that, we’re both fine with space, but considering it was important immediate plans I was frustrated.

My family were all round and it got to 6.00pm and I messaged him asking what the hell was going on. No reply. I tried to call him, no reply. I messaged his brother and asked if he could get him to call me, he said my bf said he would soon as he left his phone in his van. No messages, no calls, nothing. I was so embarrassed as my family were waiting on me telling them what was going on. We just had our dinner and got on with the night.

9pm he messaged me saying “sorry left phone in van” and that was all.... I WAS FURIOUS. I asked him what was going on and he said nothing. I of course said well there must be an explanation as to why he consciously chose not to message me and left me hanging and he said “had other stuff going on” and then I tried to ask what, in the most understanding way I could, and he just ignored me for another two hours. 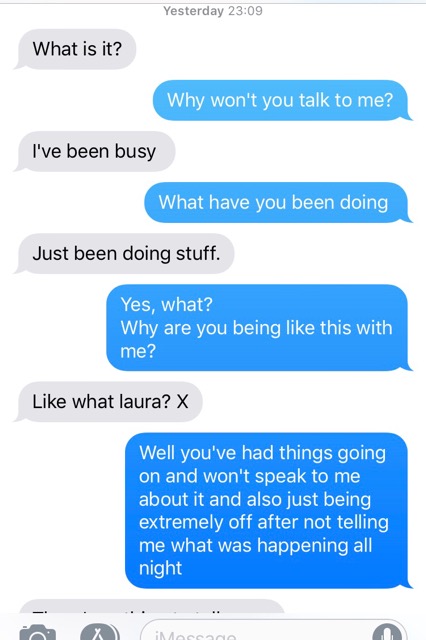 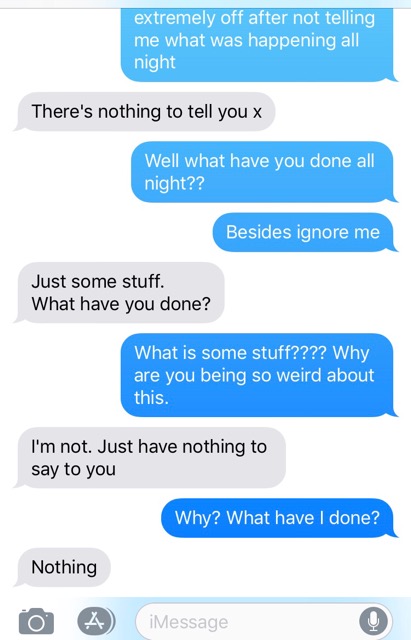 He is refusing to tell me what’s going on with him and when I ask he just says “nothing” but there must be something. He’s gone to sleep and nothings been sorted, my anxiety is through the roof.

I don’t want us to go through a fall out and shit time again, which I told him. I’ve also tried being firm that he can’t treat me this way but he’s so stubborn and said “theres nothing to sort out”.