I should probably just throw in the towel on temping this month. My chart makes about as much sense as the rest of my life, right now. Today is likely the only "accurate" temp in days, the few days prior had a lot of different things affecting them. But it's still really high for this time in my cycle, I'm just hoping I haven't ovulated early this time for some reason. My OPK yesterday was getting pretty dark already, but it's the first one I've taken this cycle, so I don't know if I missed my surge or not. Clearly, there's been no BD'ing in days.

I've been under so much stress since 2:30 Friday morning. It's unreal how quickly your life can be flipped upside down. We were finally getting everything back on track after a really rough year, and then this bullshit situation literally comes out of nowhere and falls right on our heads. My husband gets arrested, loses his job, and is facing very serious charges and jail time-- all for something he had nothing to do with. And that's not just me being his wife and defending him-- the evidence shows his innocence, but being able to prove that is going to be hard because of the nature of the charges.This could likely ruin his future and any chance at having a decent job again.

He's been held all weekend pending a bond hearing, which is later this morning. I'm just praying that they release him, and not make him sit in there until his next hearing, next month. He's never been in any kind of trouble before, he has no criminal record, and anyone that knows him knows that he's the last person who deserves to be where he is right now. It's just unreal.

I'm under an immense amount of stress right now, trying to find him a lawyer, trying to figure out how we're going to pay for a lawyer, trying to find a job immediately, worrying about him, this is just absolute insanity. I'm trying to be strong, I know he needs me now more than ever. I've lost 5lbs in 3 days because I literally just can't eat. None of this makes any sense. I probably shouldn't even be thinking about TTC right now, but it's so ingrained that it's hard not to-- and it's still something that I want. I haven't tracked anything other than BBT, and even that's been all over the place. I'll try an OPK later, but if for some reason my hubby isn't released today, we won't have any chance this month. It is what it is, I guess. I'm going to be a little sore if he gets released and I already ovulated, though.

Pray for me, ladies, please. I really need it right now. 😞 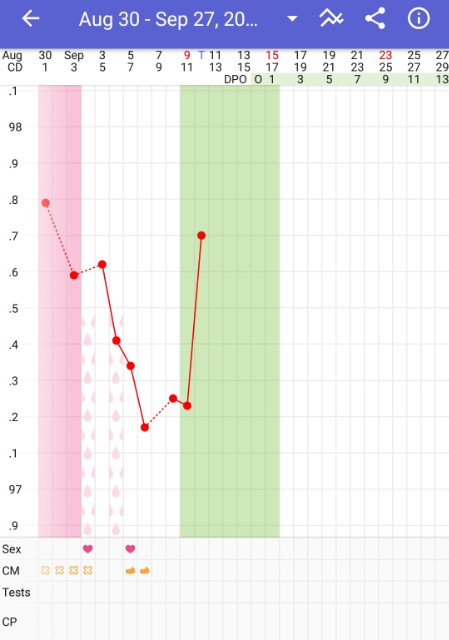