This mf came back once again thinking that Ima answer so easily. Guys he's the one that deadass decided to go see a movie with that girl from my last post. They spent the whole afternoon together and then breaks up with me like nothing. Dead changed me for someone he met from school recently and Took her to his job next day after breaking up with me, went to a party and met a new girl and started to have a thing with her. This girl was all over his snap, he took her out to movies too and eat and to his job as well like wtf. I was dead ass hurt seeing all of that and he didn't care. Days after that Came back to me saying he wanted to be with me and regretted breaking up with me and shit and the next day dubs me and goes to see that girl again after he said all that and just tells me I didn't answer you because I didn't want to go back together. Now he texts me again like wtf does this nigga want. Niggas dead ain't shit. I'm tired of him thinking that I'm just a toy that will always be available for him whenever he wanted. It hurts honestly because even though I love him, I can't believe I let him step all over me again and I was there stupidly giving him so many chances when he didn't deserve them. Girls if your ex do this type of shit to you don't go back no matter how much you love the guy. They filled with lies and won't change unless they wanted to for you. Know your worth and don't let a guy step all over you, I wish I would have realized all this before instead of wasting my time with spending like him☹️ 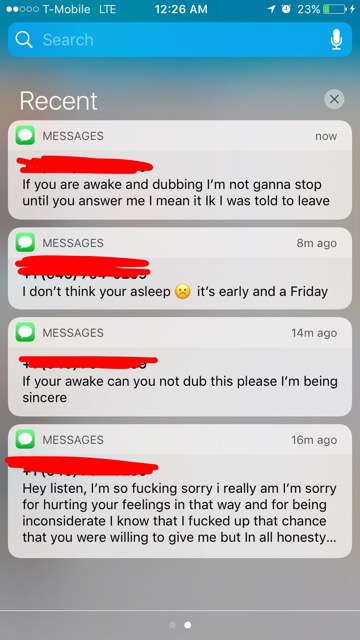