*long story* This was my third and last labor and delivery. My first two were natural births - they were so beautiful and empowering. This one was NOT the same!

I had a few scares early in pregnancy with cramping and bleeding, but always turned out to be nothing.

At 40 weeks (my longest pregnancy as the first two were born at 39 weeks) the midwife ruptured my membranes. I was 2 cm at that time. She said to expect to be a bit crampy and see some bleeding - so when feeling crampy the next day I thought nothing of it. I went in our little pool with the kids (it was SO hot that day) and had a dance party with my kids. 40 weeks and 3 days, i woke up to my mucus plug and as crazy as it sounds it smelled to me like I would go into labor that day. I ran some errands, came home, and took a walk with my little one to see my parents. I felt fine, just ready to have a baby.

11:00 am - At my parents house I stood up to use the bathroom and felt a gush - excited I assumed it was my water. In the bathroom however, it was blood gushing. I called my husband and the doctor from the toilet. I was told to get to the nearest hospital to be evaluated ASAP (which was not the one I had planned to go to)! I cleaned up the mess and wrapped a towel around my waist to hide the blood from parents.

I should have called an ambulance, but my dad was 5 minutes away so I waited for him to get home and drive me to the hospital where I was escorted to labor and delivery quickly. Meanwhile I was still gushing blood with each step I took and it was leaking down past my knees.

11:30 am - I was evaluated, and told I would deliver there with an OBGYN I had never met. I was asked to sign consent for a c-section, given an IV, and set up to be monitored. Luckily the baby’s heart rate was strong, so monitoring continued and I was given fluids via IV.

A short while later my contractions were not as close as they would like so I was given pitocin, and when checked was only at a 5, so my water was artificially ruptured.

I quickly had contractions on top of each other - very painful with no relief.

3:30 pm - Finally the nurse checked me and said I was at an 8 - my hands and feet had gone tingly, and I was given oxygen. I told them I needed drugs, but they said no (they knew I didn’t want an epidural as I expressed this strongly in the beginning). The nurse flipped me to my side and I suddenly had the urge to push. She called in the doctor, and baby girl was out in a minute or so! The doctor just barely made it in time. So I went from 8-10 in minutes!

Once she was out I had the uncontrollable shaking, but was so in love as soon as she was placed in my chest!

It was certainly not my planned birth - but knowing my placenta had ruptured prematurely, I am just thankful everything worked out the way it did and everyone was healthy. 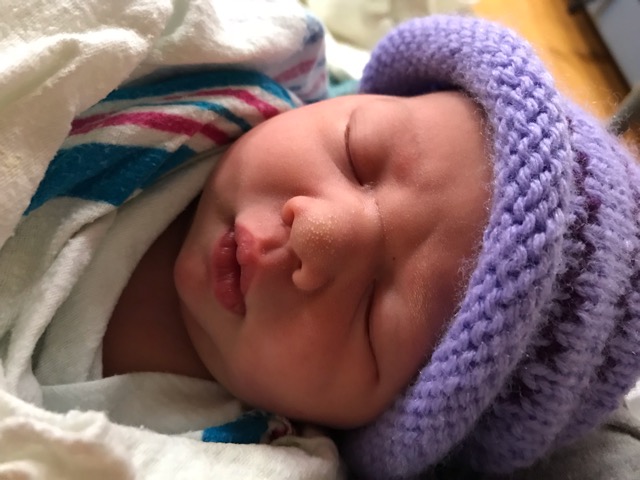