I started bleeding bright red blood, no cramping, and pretty light compared to my flow, early Monday morning (like 3:30am). Went to the ER, saw little baby bouncing around on the ultrasound and heard the heartbeat. Was told to follow up with OB after leukocytes and blood in my urine. Called yesterday to make an appointment even though the bleeding pretty much stopped. Scheduled it for 3pm today. This morning around 9:45am, I started bleeding again. This time with cramping every now and again, and a little bit heavier, but still nothing compared to my flow.

Went to the doctors and saw baby bouncing around everywhere, heart rate at 164bpm, and baby measuring at 11w6d instead of 11w2d because of length. He/she is measuring at 5.24cm (2.06in). Doctor said baby is just fine and growing normally. He took me out of work for a week and scheduled to see me back next week because he said it looks like I have the beginning of placenta previa and that’s why I’ve been bleeding. He didn’t seem concerned, said it’ll likely resolve on its own since it’s so early, as my uterus grows it’ll pull the placenta up with it up away from my cervix. He did a pelvic exam after and told me baby is fine and to abstain from sex for now.

Has anyone had “pre placenta previa” as he called it, this early? I’m nervous as this is my first pregnancy. I’m still bleeding bright red blood, and I just had a VERY small blood clot when I wiped (in picture). Please someone tell me they’ve gone through this and had good outcomes!!! I’m an anxiety stricken FTM!!!!! Help! 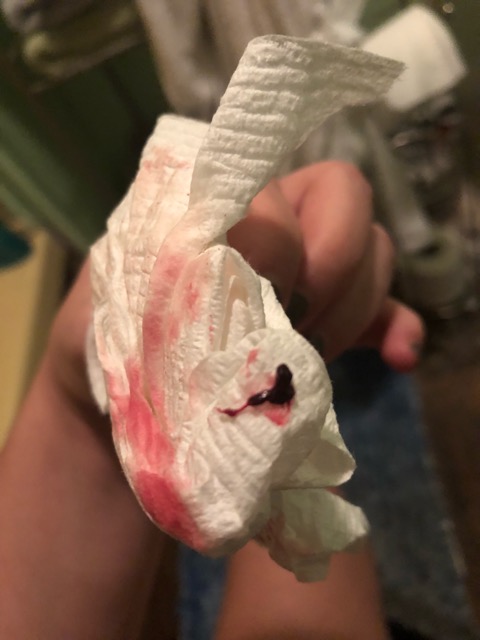