I don’t know what to do

Ladies I’m losing my mind here. The other day I got a message on Instagram from this totally random chick basically saying that she is pregnant by my ex, who happens to be the father of my unborn child (pictures included for those who want to read the messages). I didn’t reply, and I blocked her, because he is shady af and I wouldn’t put it past him to be using her to get info out of me. I mean, the man admitted he is a sociopath to me once but that’s not the point here. I’ve been trying to ignore the message but I can’t seem to stop thinking about it. I had planned to take him to court for custody’s and child support because he is a horrible person and I left him for a reason, but now I’m not so sure I should. I mean, if this is real, I have no idea who I’m dealing with here. The idea that not only he could find out where I am now, but that there is yet another woman he suckered into having his child, legitimately scares me. I thought I knew him but now I’m genuinely scared of him and what he could do. I have no idea what I should do about this, I’m at such a loss and I feel like there isn’t really anyone for me to talk to. I know this drama is absolutely crazy and I wish I didn’t have to deal with any of it, it’s stressing me out so much and I know I shouldn’t be worrying or stressing about anything. I could just really use some advice if any of you have been in a similar situation.

I do also want to mention that this man was physically, mentally, and emotionally abusive. 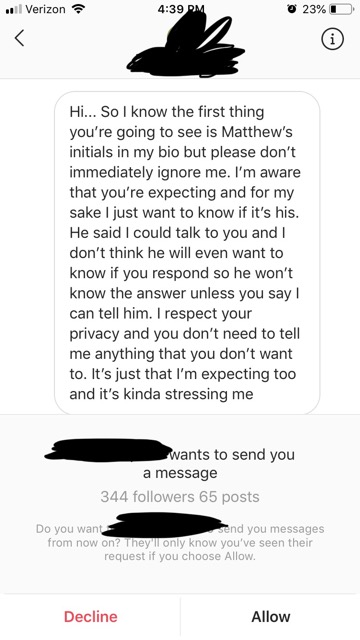