I never really liked Valentine’s Day so I did something sweet and simple for my boyfriend. He made it clear that he doesn’t really like the holiday either so I wasn’t too worried about it, nor was I expecting to receive anything from him.

Well, at 4am on Valentine’s Day my boyfriend and I were up talking and hanging out, so he leaves the room and comes back with a card. Since I wasn’t expecting anything at all I thought this was really nice. He mentioned that he had something else for me but I told him to hold on to it so I could give him what I made him at the same time. Honestly, I was expecting something silly or sex-related, but by the afternoon I had forgotten all about it. We got lunch with two other friends and when we got back to our building he had me come to his dorm where he had a huge stuffed red panda (which he had ready for a MONTH) and chocolates waiting for me. He hid this stuff in his friend’s dorm who lives in another building. It’s almost scary how good this man is at keeping secrets and surprising me 😂 I love him to the ends of the Earth though and I’m so grateful he’s mine. 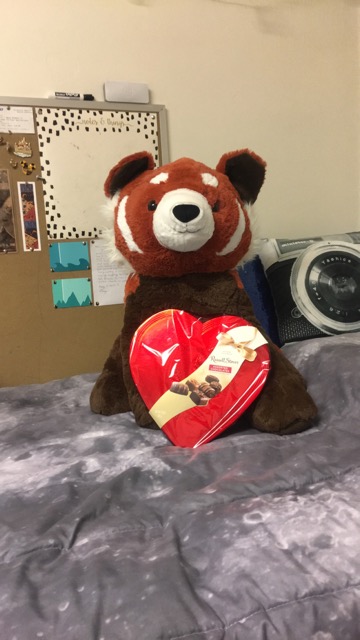