After an uneventful pregnancy my doctor offered me induction at 40 weeks exactly. I was seen the day before for an NST at the hospital after my routine 39 week appointment had been cancelled not once but twice due to weather. I found to be 3cm dilated and 80% effaced. The next day (due date) pitocin was started at 630. By 930 I had progressed to a 4 so the doctor broke my water. My contractions started becoming painful around 130pm. I was only at a 4-5 at this point and shortly after they became unbearable so I asked for the epidural. This was the most painful part of my labor- dealing with unbearable contractions while they placed the epidural. (Side note: best advice I was given was considering once you ask for an epidural you have to wait for anesthesia to get there- so it took 40 more min increasingly intense and painful contractions before I had relief). The first placement of the epidural failed because the catheter would not feed so they had to start over. The second try was a success but as soon as they injected the medication into it I had a shooting pain in my head, like an instant migraine. I had just been told spinal headaches occur in about 1 of 50 people and there I was. That was the most painful 10 minutes of my life with all those things combined. They laid me down flat and once the headache went away and the epidural kicked in I felt like I was in the warmest, comfiest bed of feathers lol but I was EXHAUSTED. The rest of my induction was a breeze but just waiting game. They used exercise balls and stirrups to prop my legs up and rotate me to help labor progress as I was slowly chugging along. It wasn’t until 10pm that I was fully dilated. However, they wanted me to “labor down” which is where I wait to push until I felt the urge. They said this method helped prevent women from pushing for hours on end. I was pleased to hear this because it had been around 16 hours since the induction began and the thought of pushing for hours was stressful, I wanted to save my energy. It wasn’t until 1215 that the urge to push (felt like I really had to poop) appeared. The nurse paged my doctor who was just finishing delivering another baby. She decided to check me to see where the baby was at and was shocked as she was only a couple inches from the exit 😅 I started pushing at 1230 and our sweet baby girl Eliza was born at 1:03am. 7lbs and 7oz on 2/2/19! I was surprised at how well the epidural worked, it honestly made delivery a breeze!

I had to have my epidural left in for the next 24 hours until they decided if I needed a blood patch to stop the spinal headaches and I did end up having to have it done. 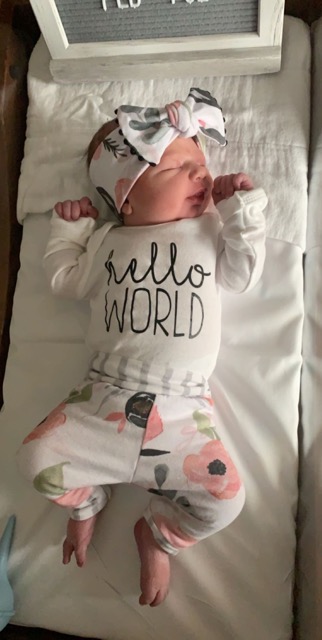