Abusive baby father, threatens me and I told him that I wasn’t pregnant??

Hello everyone! I’m a 24F, pregnant with my first child. I am currently 6 weeks along. I received a text message from my baby’s father who is an abusive monster. We had met about 3 months ago, we weren’t dating just ‘friends with benefits’. He came off as charming, caring, and sweet until we had drunken sex one long night. After that, he became very controlling and abusive towards me. Being myself, I didn’t allow him to control me. But, there’s no escaping his wrath. If I was sleeping or working, I’ll wake up a million texts of him.. calling me out of my name, telling me horrendous things such “You have to die, you need to die” “No one loves you” “You ain’t shit” and etc. Always accusing me of doing something that I would never do. The minute I defended myself and held my own ground, he will go bat shit crazy. He knew there was chance of pregnancy but he did tell me “I can’t have a child with someone, I don’t fuck with.” Or “if you are, both you and that baby can die.” After tolerating 7 hours of getting diminished via text, about a week before I got BFP. He had blocked my number. He used to threaten me, especially with death threats. Like, “I’m going to get a female to go jump you.” “I’m going to send a female to set you straight.” Solely, because he couldn’t handle the fact that I wasn’t submissive. I was left alone for about a month.

I received a text this morning. 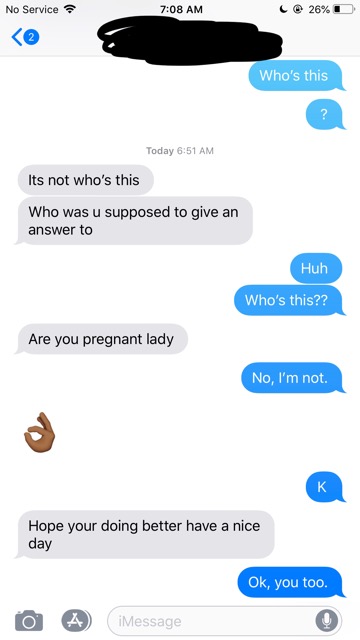 I notified him to leave me alone, and trust me. He didn’t. He started to threaten me MORE. I had asked “If I was pregnant, would you abuse your child?”

His response: I wouldn’t touch my child, but I would have continued abusing you.

Me: You are scary.

Him: I can be, but you put yourself in that position. I wasn’t trying to hurt you, but you lied to me.

Me: You are a Narcissist

I never once in my life had lied to this man until today. I’m sure his insecurities were telling him otherwise. The moment I called him a Narc. He started to send threatening voice notes (that I’ve saved). “I’m not going to leave you alone until you’re upset and block me.” He was threatening to find a female to come beat me up around my neighborhood aka his ex-girlfriend. “When Fi, catches you around your neighborhood, you will learn your lesson. I’m not going to stop her, you will see you to never talk crazy to me again. I will see you in video and I’ll text it to you via your iCloud from another phone #.” And I said OK.

I don’t feel guilty for lying about my pregnancy to him. He’s a monster! And I’m sure his ex suffers from Stockholm Syndrome, if she’s doing favors for him that could land them in jail. I’m afraid to go to the police and they’ll get a restraining order which is just a tiny piece of paper. They’ll ask for a paternity test but I wholeheartedly don’t want him to be a part of my child’s life. I don’t want help nor child support from that man. He will attempt to say that he wanted to be a father. Which he did admit in text. The possibility of being pregnant, I said I wouldn’t mind having child until he started showing his abusive side. I don’t know what to do! I’m super afraid of this man and my child’s safety. Everyone’s telling me to go to the police with the text messages. But that’ll open up a new world, I might be forced to share my child with him.