The same argument over & over 🙄

I know this is long, but if at least a few people read the whole thing and offer some advice, I’d feel better.

My husband and I have been having the same argument over the last couple of months over the fact that he wants sex multiple times a day every day, and I don’t have much of a sex drive right now. I’ve explained to him multiple times that it’s because I’m 22 weeks pregnant, working full time, taking care of a 1.5 year old when I’m not working, and on top of that he bed shares with us so we can’t ever do it in bed where it’s most comfortable either.

Not to mention, when we first got together and for the first year or two, we had sex sooo much. Never went a day without, and it was often multiple times a day like he still wants. The thing that changed all of that was two years ago when he started saying he wanted an open relationship so he could have sex with other people, but I still couldn’t or he would never touch me again. He was always bringing up threesomes (HAD to be another girl, not man of course), telling me that I wasn’t enough and he craved more because he “isn’t monogamous at heart and doesn’t know if he can be” and even once when our son was 6 months old he drunk messaged some random girl on fb asking her if she wanted to fuck, which she turned down and messaged me right away because she saw he was married. Basically all this bullshit that killed any speck of self confidence I had and took away all of my sex drive pretty much because i no longer felt good enough and every time we would start to do anything I would get so self conscious and always think about all of that stuff.

Now, things are way different than they were then and he realized he was being really immature back then and did a lot of growing up, and it’s not fake so don’t assume that, it’s taken a lot of work to get us back to mostly normal. However, that stuff still plays in my head so often. Because when we were first together he always told me I was the best he’d ever had and that he would never need/want anyone else and even if we didn’t work out that he wouldn’t want to sleep with anyone else. All these things he’d say to me made me feel so great and like the best woman out there and that’s what fueled my sex drive and made me want to be with him all the time. So to have all of that taken back multiple times over a year span has really fucked me up, but I’m working on it still.

Anyway, here’s a couple things he said to me in our argument the other day: 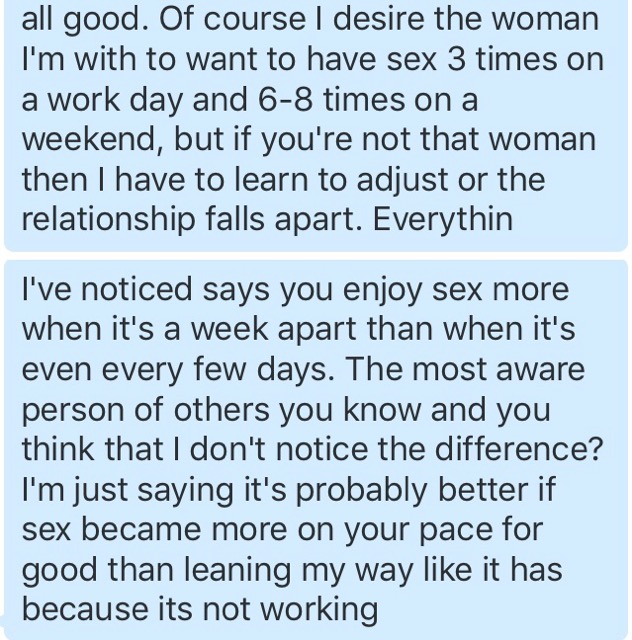 And he told me sex was only going to be a special occasion thing for us now because if I don’t feel the same way about it and it’s not as important to me as it is to him, he doesn’t want to share it with me. Then I asked how he knows all these women are begging for sex online if he doesn’t use social media anymore (he only has IG which he barely goes on, and FB messenger but deactivated the account) and this was his response: 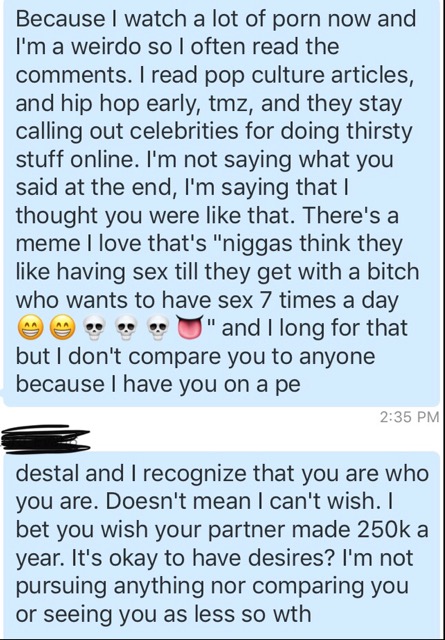 ** I’m reading every comment and I appreciate them all. I just don’t want to reply and take away the anonymous part because I recommend this app to everyone and so idk who I know could possibly see it. This is the only place I’ve reached out for help, because I don’t have friends I could trust with anything or that care other than to know my business, so I started keeping everything to myself. I have been trying to get a counselor, but everywhere my insurance works at is full and not accepting new clients. We do plan on doing couples counseling as soon as we are able to get someone.