So here is my story. Started spotting brown three days ago so I thought for sure AF was coming because I spot a few days before. That morning I had tested at CD25 and 10dpo very negative. Continued yesterday very minimal only when I wipe. Once yesterday it was red so I was like ok it’s starting, but after that time it went back to brown. Had a drink and relaxed. This morning my temp dipped half a degree but was also taken an hour earlier because I woke up with a toothache and went to get ibuprofen and knew I wouldn’t fall asleep fast enough for an accurate read. So woke up went to the bathroom. Then an hour or so later went again but thought I would test just to be 100% sure because I had plans to be drinking today. So today is Cd27 and 12 Dpo with AF due between Monday and Wednesday. Spilled the cup all over the place Oi vey. There was the smallest amount left in the cup so I tilted it and I had to hold the test tilted and figured it would be inaccurate so whatever. Well by golly that thing had a line. So I went one more time and got just enough in the cup to use a FRER and there was a faint line 😭 I thought for sure I was out! The spotting is still going and I’m so nervous because my only other pregnancy was 11 months ago and ended as a chemical, so I’m praying this one sticks because it’s been a long 15 months with no success but that month. Took another this after noon (bottom) on a short hold and I can still see something but very faint. I’ll retest with fmu tomorrow but please pray for me or do whatever you believe in that if sticks, the spotting stops, and those lines get darker 🤞🏻🤞🏻🤞🏻 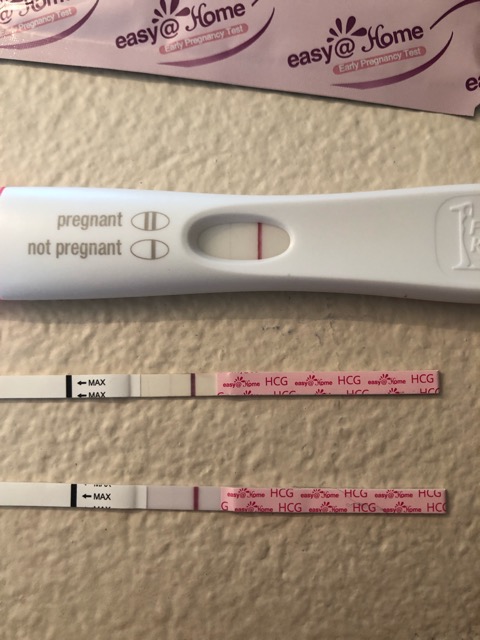 Btw THESE 👏🏻 ARE 👏🏻 NOT 👏🏻 EVAPS👏🏻 So if you are coming here just to say that then take your negative energy to another post. All lines showed within each tests time frames.