Hi all, this is my first time posting. I’m so confused right now. We have been TTC for a few months and this month we did OPKs and BD at all the right times and used preseed and thought this month was probably our best shot at it so far.

Usually a week or more leading up to AF I have sore heavy breasts and I feel quite bloated etc. This month I have had none of that. AF is due tomorrow.

Because I felt different this month I decided to test yesterday. I POAS in the afternoon (CB) and the test window was blue and cloudy but no line. Then I looked at it last night and there was a faint blue line. I thought it might be an evap line but I read that they don’t turn blue. I also read that if you get an evap line but put water on the test window then the evap line should disappear (as has happened for others). I put some water on and the line is still there.

I did another CB test this morning and it was negative, then had a look this afternoon and there’s a faint blue line again.

Between POAS this morning and discovering the 2nd blue line I went and got a FRER test, which is still showing negative after a couple of hours.

Are CB tests just messing with me? Has this happened to anyone else? 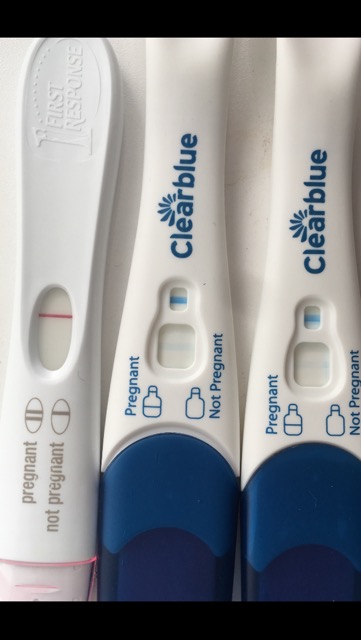