Im not so sure what i should do "BF Issues"

Im 28 and hes 30, this is my first real relationship and I love him so much. Ive told him that, we have been together since the end of 2015. There were some red flags in the begining like he pulled my hair when i was sleep because i accidentally rolled over on his. Pulled it hard enough for me to cry. Um he went to the store and got something to eat and drink for himself while i stayed behind helping in his store (i never go anywhere without thinking about him and bringing him something) and when he came back he only had stuff for him, so i playfully asked u wheres mine, he responded like he was upset i asked and he said "i didnt know you wanted anything." I was like "i dont always know if you want something thats why i ask or just get it." He said "well dont, dont get me nothing else" which obviously i still do. That was a couple things in the first year. And here we are 2019 and ive been called ignorant so many times im starting to believe it and he called me a bitch twice. I mean idk maybe i have done some irritating stuff but why call me out my name. He dont like how i sleep or snore or how i talk, i am natually a loud person, i talk loud and this is how i am when im excited, happy, annoyed, mad, but you obviously can tell the difference. I simply talk loud i try to be quieter but... he dont like me looking at him. I could want to do something and if he doesnt, we dont. Well we argue almost 3 or more times a week. He looks at me like i disgust him. Mind you im a plus sized woman and hes a very thin guy, i was bigger when we started to date and i lost a lot of weight in 2017 and by end 2018 i gained half back because he buys junk for me and then after i eat it he says "i thought you were on a diet". I have been eating healthy and working out and now hes annoyed but he gets annoyed when i eat bad, idk. He refuses to meet my dad and... its just so much, but i love him, and hes going through stuff. Anyways this year has been the worst we havent been intimate in 5 months and before that it was 4 and before that it was 3 and before that 1 a month or everyother month. I gave him oral and after he said give him a minute to recoop and then nothing... no nothing. He says all i think about is sex, but i miss tge intimacy of it. I let him use my car etc and other stuff, he fusses at me about crazy stuff. He got mad because he was dropping me off to work so i got in the passenger seat and i got called all kinds of ignorants and childish. Its crazy. His child would hit me and pull my hair and he wouldnt do anything about it. He wont spank the child. He gets irritated when i cry, instead of comforting me he would either go off or leave. Hes not cheating surprisingly been through his phone a few times. I work very long hours he doesnt and he gets agitated that im super tired. He wants massages and gets mad if i dont because im tired. Today we got into it and not only did he say what im about to post but on top of that he tells his child i dont care about him. Not to mention we were supposed to start TTC in 2020. 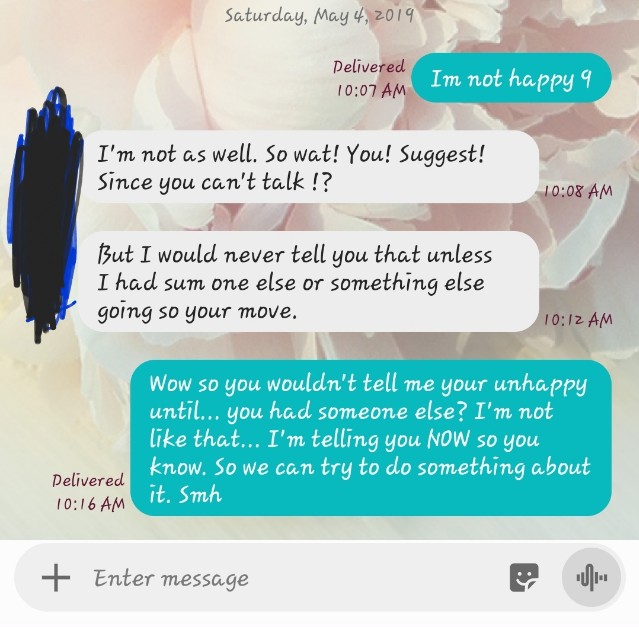 Every now and then he will apologize or say i want to give u the world. Idk idk idk, but this really bothers me. What do you think what should i do?

Update: thank you ladies for your kind words I've been crying all day. This isn't who ithought he was and it's hard to even think about leaving him, but i know i have to because i feel like I'm slowly dying inside. He doesn't like to kiss, he doesn't comfort me when im sad. All these things i didn't realize before because i would hide when i cried or when i was sad, this is so embarrassing. I never realized how low my self esteem was i just thought this is part of being in a relationship... you know ups and downs but im truly stressed. I don't know how to leave we are buying a house it's in both our names and im scared. I've never liked change and this is a big change. Im worried what will happen to him, if he'll be ok. I know i sound dumb as a box of rocks but i do love him whether he loves me that had yet to be determined. My friend said leave and if he changes and does better then he loves me but if not move on. I feel so dumb for letting this happen to me.