My husband and I got married this past February. Everything was perfect we barley argue or fight. And if we do they are nothing serious. Fast forward last Friday the 14th I was at home I had the day off so I decided to work on laundry and do it while laying in the bedroom. I kept hearing a weird sound and my husbands Apple Watch kept going off so I opened it and found he’d been texting another woman. I immediately lost it. I’ve been threw this so many times but this was the first time it hit me so f***ing hard. They were talking about him going over there to her place and hooking up and what not. I think the part that hit me the hardest was a text she sent him that said “ as long as your with your gf and I’m with mine we can’t be serious” like tf gf? We took vows we are married. So I questioned him about it and he tried telling me that he only said that stuff to see what she wanted with him friends or more. But they both instigated it. It was not just a one sided conversation. It’s been a little over a week and I can’t sleep, eat and I just cry constantly and all he does is begs me to stop he will fix it. I’m just hurt. I haven’t been able to talk to anyone about it because my family doesn’t live in the same state as me and my friends don’t do well with relationship advice. I also don’t want anyone to know because he truly is a great guy and I don’t want him hated because he screwed up and did something he knew was wrong. I’m just at a stand still and I don’t know what to do I can’t even hold a conversation with him because I can’t keep my emotions together. I just needed somewhere I could vent and not have judgmental responses. Thanks.

Update: thank you ladies for the kind words and advice. Let me put this out here first of all he was a great guy. This situation has been nothing but rough.I haven’t talked to my family about it because they have enough going on with my mom being very sick and this would just put to much stress on her that’s the reason I haven’t talked to her about it however he allowed me to go threw his phone today and he actually sent the other female a message and I was quite surprised I seen her name on his fb messenger and my blood started to boil the. I read the message. We talked about what tf he was thinking and he knows he completely destroyed our trust he also knows I won’t fully allow myself to open back open to him for a long time. He’s agreed to move into one of the spare rooms in the house to give me time to heal and regain my self confidence again. Also I will be meeting with a therapist very soon. He brought flowers home and has washed the laundry so it was a nice gesture but I’m still disappointed. Thank you again ladies for your kind words it means so much to me ❤️❤️❤️ 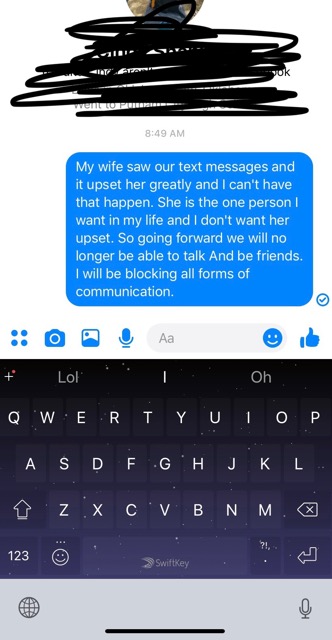