At 30 weeks pregnant, I got called a “fat bitch” repeatedly

I was at a Slipknot concert with my husband last night. We bought seat tickets months in advance. Mind you, I didn’t really want to go that much being so pregnant but I did it for my husband. My husband picked the seats out knowing that my 30 week pregnant self may need to be by an aisle for 🚽 breaks 🤣. Plus we knew that the lawn seats would be the rowdy crowd and we should be pretty comfortable in seats down below. So we were the third and fourth seats in from the aisle. we also had a banister in front of us that was perfect to rest my swollen ankles on 👏🏻My husband was patting himself on the back for his seat selection 🤣 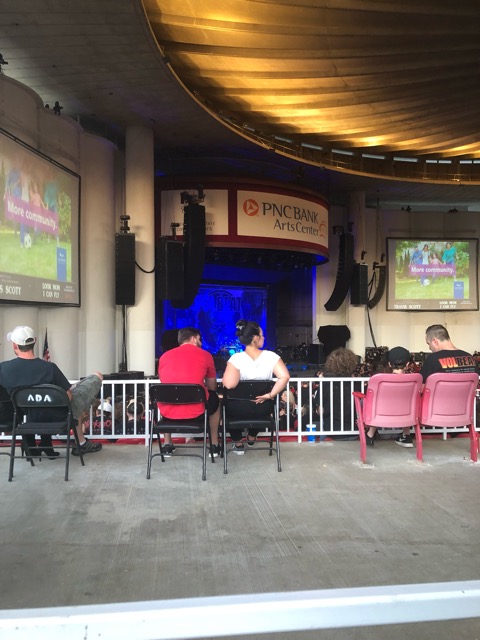 Two guys came and filled in the two seats to the left of me by the aisle. Slipknot came on, and everyone stood up to jam out. Except for me cause #swollenankles and #hotflashes 🥵. All of a sudden, two older men came down and stood next to the guys to the left of me. That’s when I started getting pissed. The space we were in was TIGHT and now there were four grown men in an area designated for two people. I started feeling cramped and squished and the guy to the left of me practically had his ass in my face. Not to mention I was super hot from the crowd. My husband noticed and told them to move down. They did and I was appreciative.

Until the older gentlemen had TWO more people come and join them. So now there’s SIX grown people in a space for two. That’s when I got cramped again and got pissed. I was just nervous that one of the guys would lose their balance and fall on my belly. They were all pretty drunk and it just had my nerves shot. I kept telling myself “you paid good money for these seats you should be comfortable right now and not having to worry about getting hurt”. I finally stood up, asked the guy next to me if he paid for those seats. Then, asked the older man if he paid. Both groups said yes so clearly someone was lying cause they weren’t all together. I tried explaining that there’s not enough room for six people, kept pointing to my belly, and yelled it’s not safe. The older man shrugged it off and rolled his eyes and said “it’s fine”

That’s when I felt the rage. That hormonal pregnancy RAGE. I’ve had it a few times and have been able to shrug it off. NOT THIS TIME BUDDY. I started making my way to the aisle. The older men and their two friends, a woman and her boyfriend, were in my way and looking at me like

I was finally like “GET THE FUCK OUTTA MY WAY. MOVE!” I am so not like that! But the pregnancy rage was full BLOWN and uncontrollable. I mean I could be in labor for Christ sake (i wasn’t obv) and these people were in my fuckin way.

I finally waddled over to security who asked everyone for their tickets. Well, the woman in the group of older men got pissed because she didn’t have a ticket for those seats.

She came over to me and started yelling “FAT BITCH FAT BITCH”. I just about threw myself at her. My husband grabbed my arm like calm down you don’t fight people that’s not you and you’re pregnant so slow your roll 🤣. He called her a few choice words and then she tried leaping at him but her smart boyfriend held her back. My husband is very intimidating looking so good choice on his part. 👏🏻👏🏻👏🏻

We went to the bathrooms. I was fuming. And when we got back to our seats the older men and the woman and her bf were still there. My husband and I switched seats. As I walked past them holding my belly, I think they fuckin realized I was pregnant and was only concerned about the space. I could see their eyes glance to my stomach. The older men kept trying to say something to my husband, I’m thinking maybe an apology?, but my husband was over it and ignored them 🤣.

Moral of the story: just be nice to people ! And if you’re pregnant and uncomfortable, stand up for yourself. Needless to say, I will not be attending any concerts while pregnant in the future 🤣 please no mean comments last night did enough to my emotions 🤦🏼‍♀️🙄