Wow!! So my sister came to me earlier and was saying she didn’t feel well and her period was suuuuper late like 2 weeks late and she didn’t want to tell mom so she ask me if I’d take her to the store to get a test and when I got it on the way back with her she was asking me questions and stuff about pregnancy symptoms asking if anything she was feeling could be a pregnancy symptom and she stated that she was nervous and embarrassed and I told her she shouldn’t be and that I would take one too so she doesn’t feel alone and when we got back to the house we kinda sat in her room talking for a bit before we took them and she continued asking questions and once she was ready we both took them and went back to sit down in her room and talk she was crying and I was consoling her telling her it would probably be negative because she was saying that she hadn’t had sex since her last period but when I walked into the bathroom I saw....... 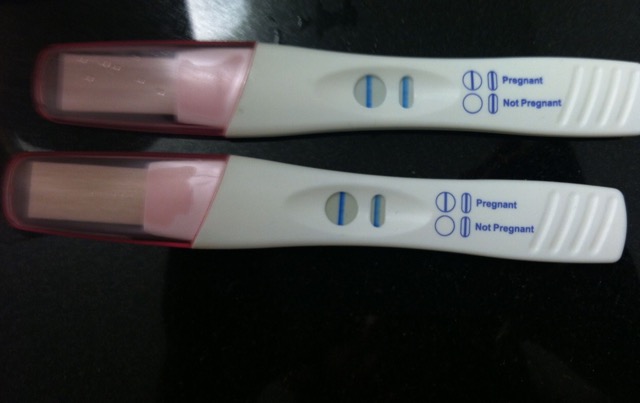 TWO BLAZING POSITIVES!!! I guess we’re both pregnant. Moms gonna have a heart attack... I’m not gonna state our ages because all I’ll get is hate but after she seen that she was just in shock she just sat there on the bathroom floor with the tests in her hand and was really quiet and shaking with tears rolling down her face... I was crying too😭 that’s my baby sister and she’s not a baby anymore💔 I’m still crying as I’m typing this and I told her we could tell mom tomorrow I don’t want to do it all at once but idk what to do do you have any advice.... please no hate.

Edit: the one on top is mine i sat mine down first I have mine in a shoe under my bed tomorrow is gonna be a stressful day I’ll let y’all know how it turns out.. any idea if we should tell her at the same time and get it all over with at once or wait do it separate... me and my sister were joking and she said that I should tell mom she’s pregnant and she would tell her I’m pregnant and send the message at the same time but I wouldn’t want to find out that my daughter is pregnant by text.... it would give her time to cool off but I have no idea how this is gonna turn out... but I’m Lowkey excited too see how far along we both are and how far apart our babies will be❤️ and my sister truly is my best friend I love her so much she’s the best sister I could ask for❤️ but I’ll be back tomorrow for an update... I’m so nervous.

Update: We decided to tell mom at the same time and I think it was the best way other than one of us telling her and her being focused on one at a time it would probably be worse that way so we told her so she could cope all at once. We told her in the livingroom on her only day off this week (Sunday) she was on the couch watching bachelor in paradise on demand like always lol and me and my sister both walked in and ask her if she could talk and she cut the tv off and gave us her full attention. Right when she said “what’s going on” we both just broke down crying and shaking and my sister pulled hers out and moms jaw dropped and I had mine in my hand in a tight flinched grip “we both had a hoodie on) and after that she really didn’t say anything she just hugged us both and we were all crying by that time she took the test out of my sisters hand and looked at it and then took mine and sat them down on the table and just stared at them and looked back and forth from me and my sister and both of the test... I think she broke the mood by saying “now I know this is a joke because there is no way this could happen” me and my sister kinda laugh and cried and said “no it’s real...” then my mom said “can you excuse me for a minute” and she walked into her room. Me and my sister weren’t talking we were just crying in the livingroom and waiting on mom and a few minutes later she came back with a brand new face she was just like “okay it’s okay I’m glad you told me, now what are we gonna do from here on?” And we had no idea???? She said she’s gonna call the obgyn and get us an appointment (we already called) and during the appointment they will talk to us about our options. I honestly don’t think it could have gone better I thought it was going to be way worse than that... I love my mother so much and I appreciate her so much right now me and my sister have an appointment on the same day they are gonna do our ultrasound in the same room one after the other my mom said and we have an appointment on Tuesday so we’ll know how far along we are

Edit: now that my mom knows I’m 16 and my sister is 14. And thank you for all your support❤️